Legs trembling, physically exhausted and overcome with the euphoria that accompanies great accomplishment, Nick Alkan stood proudly next to his father Brett on the Summit of Mt. Rainier. Nick Recalls “It was so clear that we could see Mt. Shasta in California” .

Fast forward four years and Brett Alkan gets winded climbing the stairs in his home.  Brett has (PKD) Polycystic Kidney Disease,  a genetic disorder characterized by the growth of numerous cysts in the kidneys. In the United States, about 600,000 people have PKD, and cystic disease is the fourth leading cause of kidney failure. Brett’s kidney is currently functioning at less than 10% of normal and continues to weaken, he needs a new kidney. 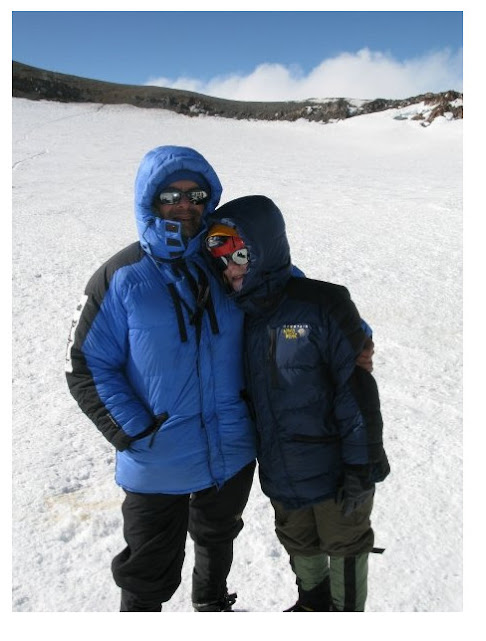 Nick and his father Brett on the summit of Mt. Rainier

Brett, Ellen and their three children Lauren (14), Jonathan (16) and Nick (18) live  in Issaquah, a small city ensconced in the Cascade foothills.  With spectacular forests and trails almost literally in their backyard, the outdoors has always been an important part of family life.  But for Brett, more rigorous hikes have had to be put on hold until after the surgery

That this day would come was no surprise to Brett.  “I’ve known that I’ve  had kidney disease since I was twelve, I’ve had my whole life to contemplate and  anticipate, it hasn’t been a shock.”  When Brett’s kidney function fell below 20% his doctor told him it was time to start looking for a kidney match.  Brett’s  match must have his same blood type, type O. Even though  type O is the most common, still only 38% of the general population have type O blood.

It was two years ago this week that Brett was placed on the transplant list. In cases where the recipient is unable to identify a donor the wait for a kidney from either a living or deceased donor can take three to five years or more. In the meantime the kidney increasingly loses function.  Many recipients on the waiting list end up needing regular dialysis treatments to stay alive, which is why it was so important for Brett to try to find a donor on his own

Just over half of all kidney donations are from deceased donors, but there are several advantages to living kidney donation. “Any live donor, even if its a total mismatch is better than the best deceased donor,” says Dr. Shield of St. Francis Hospital, Kansas, “Kidneys from a living donor are always healthier.”  While there are risks associated with all surgical procedures, National Kidney Foundation statistics indicate that the  vast majority of living kidney donors experience a complete recovery, most within  a few weeks after the surgery.

Prospective donors undergo a rigorous pre-screening process that is as much designed to assure the health of the donor as it is to verify the suitability of the donors kidney for the recipient.  Brett’s wife Ellen was the first to volunteer. Despite her persistent efforts she was not medically cleared for donation.   “It is so frustrating, every time I overcame one medical hurdle they seemed to find another one,”.

While Ellen struggled to get approved for donation, close friends and acquaintances hearing of the circumstances began stepping up. Ellen was awed by the initial number of people who came forward to offer Brett one of their Kidneys. There was Brett’s friend from Middle School, the husband of Ellen’s best friend and other close family friends.  “It’s amazing and humbling to see how people responded to Brett’s situation”.  Of the six who volunteered, four were quickly ruled out during the initial  screening, the other two made it further but were not considered ideal matches.

While Brett’s ailing kidney deteriorated down to 8% of normal function, his options seemed to be fading .  With no new donation prospects on the  horizon, Brett  hesitated to ask for help. “I try to be a good father and husband, I didn’t want to be seen as a kidney disease guy.”

Brett’s oldest son Nick , a Senior at Northwest Yeshiva High School in Mercer Island,  saw the toll the disease was taking on his father. “My father and I were mountain climbing together just a few years ago, the disease has made him tired and he always feels cold. It was his choice not to ask for help, but that didn’t mean I couldn’t ask for help for my dad.”

Within hours of activating the “A Kidney for Dad” page on Facebook  according to Brett “The response was fast and overwhelming”.  Those who could not donate were asked to “like” the page and spread the word.  Nick was stunned “even people who didn’t know my dad wanted to donate”.  Those who were not matches for Brett were urged to put themselves on a donor list so they could help someone else.

One person who saw the Facebook page did know Brett. Kari Alexander was a longtime friend of the family. They met back when Kari was  Lauren’s (Brett and Ellen’s daughter) Girl Scout troop leader, she and her husband John have been friends with the Alkans ever since. 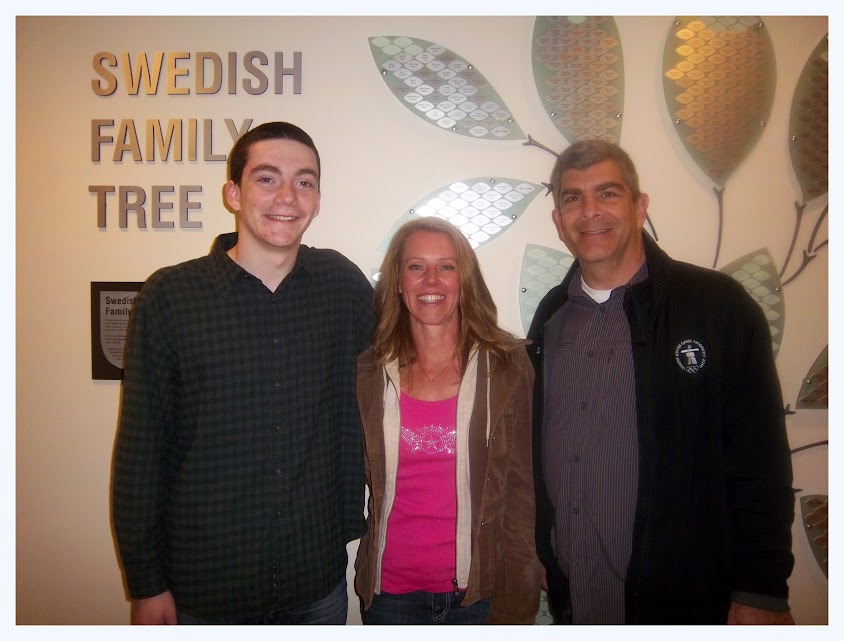 Although Kari knew that Brett had Kidney Disease, she did not know how advanced the illness had become until seeing the Facebook page on February 11th, 2012.  ” As soon as I read it, I knew God was telling me to be the donor.  I walked into  my husband John’s office and said, “I think I need to get tested for Brett”, he said, “well good, because if you don’t, I will!”  I emailed Ellen, Brett’s wife, and asked her what the next step was.  The next day I made a phone call to the Living Donor Program at the University of Washington Medical Center.”

Brett initially felt uncomfortable accepting the donation from Kari. “I wanted to make sure she understood what she was about to do, and the risks she was taking.” But Kari persisted and Brett ultimately accepted.

For Brett the sense of gratitude he feels for Kari is overwhelming “It is humbling beyond measure to have someone give so much for you”. Contemplating the events of the past few months,  Brett expressed thanks to his son as well.  “Without Nick and his Facebook page, I wouldn’t be on the verge of getting a kidney transplant.”

While overwhelmingly grateful to Kari, and thankful for the support of his wife and children, Brett wants it known that he is “so very appreciative of all of the incredible people who have tried to help me, I am humbled by the love and support that I have been given.”

Kari is also grateful at having the opportunity to make a difference. “There is no better feeling than knowing you may possibly be able to save someone’s life.  I am so honored God is using me in this way.”

Nick is already planning his next climb up Mt.Rainier. “We’ll stand up on the top, take in the view and then plant a flag with the letters PKD on it”.  “We will plant the flag on the summit, hold our hands up together and announce to the world that we conquered PKD!” All because of the support of  family, community, a very special friend and Facebook.

Editors note; The transplant surgery has been scheduled for this summer. Kari’s blog where she is documenting her donation journey is at http://donorgirl.wordpress.com/