Memorial to Jewish community of Rhodes was vandalized this week. 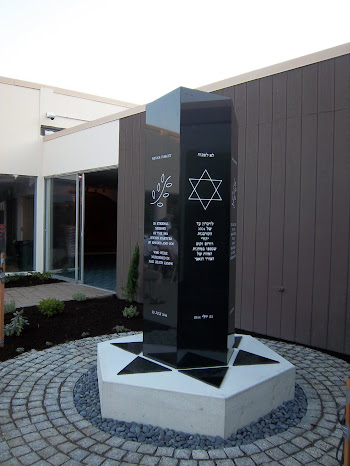 THE FORWARD:  The Holocaust Memorial to the Jews of Rhodes was spray painted with swastikas on all six sides of the memorial. The initials AME also were spray painted on the monument, and may refer to an unknown organization, according to the Greek Helsinki Monitor. The attack occurred overnight on Saturday. The Security Police of Rhodes began an investigation into the incident on Saturday morning. It is not the first time that the monument has been vandalized.

The monument was dedicated in 2002, in the Jewish Martyrs Square in what was the old Jewish Quarter of Rhodes. On each side of the monument the words “Do not ever forget the eternal memory of the 1604 Jews of Rhodes and Kos who perished in Nazi death camps” are etched, each side in a different language. Some 1,600 Jews were rounded up by the Nazis in July 1944. Today only a handful of Jews remain.The neo-Nazi Golden Dawn party has gained support in Greece since the country fell into a harsh economic recession amid the European crisis.

Editor: This desecration of the monument in Rhodes has shocked the Jewish community of Seattle where there is a significant community of descendents  of immigrants  from the Greek Island.  Congregation Ezra Bessaroth  founded in 1910 by Jewish immigrants from Rhodes erected an exact duplicate of the Rhodes memorial in their synagogue courtyard in 2010.

← Israeli invents cardboard bike… that really works
Hour by hour: What to watch on Election Night →