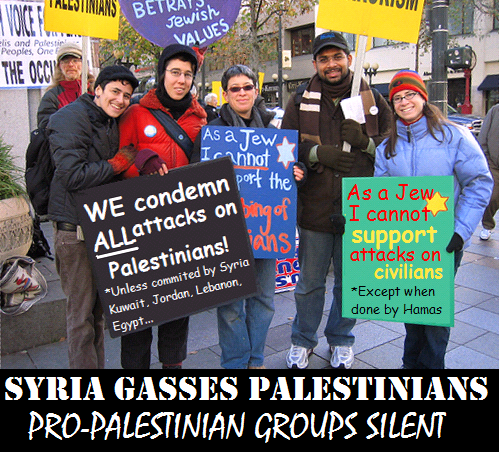 Several news agencies are reporting the use of chemical weapons against Palestinians in the Yarmouk refugee camp. Palestinian sources said that 22 people have been killed in the area, most from inhalation of poisonous gases.

Pro-Palestinian organizations such as the International Solidarity Movement (ISM) and Jewish Voice for Peace (JVP),  known for their hyper vigilance regarding any assault, real or imagined against  any Palestinian, have in this case been deathly silent.

This silence belies the true intentions of these disingenuous movements. For if it is Palestinians they support they would be front and center in the condemnation of these war crimes. But this attack was commited against Palestinians by Syrians and hence the silence.  JVP, ISM, BDS and all of the other like minded alphabet soup organizations could not care a wit about one or hundreds of dead Palestinians unless Israel can somehow be implicated. Ultimately and obviously it is not the well being of Palestinians that is their concern but rather the destruction of the Jewish state.