On March 5th of 2014, Seattle’s Jewish community newspaper, the JTNews published a story regarding an upcoming visit by Jewish Zen Master Bernie Glassman. The paper dutifully reported how Glassman “takes facets of his Jewish upbringing into his Zen practice” and co-authored a book with actor Jeff Bridges. What the paper failed to share with readers was Glassman’s active partnership with an individual and organization bent on the destruction of the Jewish state.

Through his organization “Zen Peacemakers” Glassman is partnered with Sami Awad Executive Director and founder of Holy Land Trust (HLT) a major sponsor of the anti-Israel Christ at the Checkpoint.  Glassman’s group (Zen Peacemakers) and logo is featured on the HLT website and  Glassman is praised by HLT as “instrumental in furthering our work”.

Ostensibly a proponent of non violent resistance to Israel, Awad has stated that non-violent demonstrations are “not a substitute for the armed struggle.” Awad has also minimized Israel’s legitimate security needs as a “manipulation” of the fear of another Jewish Holocaust.”  According to NGO Monitor,  the Bethlehem based organization “Conducts highly politicized tours promoting the Palestinian narrative”.

At a speaking engagement in 2009, Awad openly acknowledged engaging with “Hamas leaders and other militant groups”.  Awad Supports anti-Israel BDS (boycotts, divestment, and sanctions), including signing a petition in May 2005 calling for the academic boycott of Israel.  A December 2005 HLT conference included radical NGOs such as the International Solidarity Movement (ISM), Sabeel, and Israeli Committee Against House Demolitions (ICAHD).

Awad is a pioneer in subverting Christian imagery and utilizing anti-Semitic tropes as weapons against the Jewish state.  Awad wrote that an Israeli incursion into Bethlehem during the second intifada was “akin to the Roman massacre of infants“. “Israeli army troops were being brought from all corners into Bethlehem like Herod’s soldiers… We pray that the reign of Herod will come to an end and that the message of the Prince of Peace will again be a light from Bethlehem to all corners of the world.”

This is not a loose partnership; Glassman’s website features an entire page dedicated solely to Awad. According to Glassman’s website “Bernie Glassman is going to Israel and Palestine twice a year. He has agreed to assist Sami Awad in his Non-Violent Peace efforts.”  It is through Awad’s distorted prism that Glassman’s followers are indoctrinated regarding Israel. These “educational” junkets led by Awad and his organization are a core program of Zen Peacemakers. 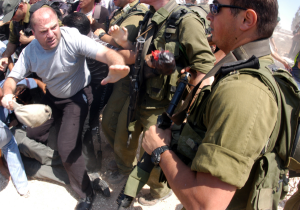 Participants in  Glassman’s tours of “Israel-Palestine” return with a sharply distorted, often radicalized view of the conflict. In their post trip reports, participants make frequent reference to the “Separation Barrier” and the hardships inflicted by it on the Palestinian populace, not once is there mention of  the horrific terror attacks which the barrier was constructed (rather successfully) to prevent.

Aviv Tatarsky, a graduate of one of Glassman’s tours laments  that “The Nakba – disaster in Arabic – is how Palestinians refer to the destruction of over 400 villages and uprooting of over 700,000 Palestinians who became refugees in the 1948 war. The war, which gave birth to the state of Israel, is called by Jews the Independence War.” Says Tatarsky  “One people’s joy marks the other people’s catastrophe.”

One critic of this  biased approach to the conflict is Rabbi Bob Carroll.  Reacting to a report from one of Glassman’s Palestine tour participants, the Rabbi notes  “you did not speak about solidarity with Israelis, either as a people or as individuals, many of whom (virtually all of whom, in fact) have paid a terrible price because of the conflict. your message seemed to reflect a bifurcated approach which I found troubling – Palestinians need solidarity, Israelis (apparently) don’t. Israelis need to be educated, Palestinians (apparently) do not.”

In a pained letter to Glassman, Len Moskowitz, an observer of Glassman’s career wrote, I’m saddened that you’ve turned the Dharma into a club with which to bludgeon Israel. There is always more than one side to a story. You’d adopted the Palestinian narrative so thoroughly that there is no room left for another perspective. Sad…“

The recent Pew report revealed that nearly 80% of American Jews by religion say they are very or somewhat emotionally attached to Israel. With this in mind, it seems to us as journalistic malpractice that the “Voice of Jewish Washington” would fail to give their readers even the slightest hint that the person whom they are promoting has been actively involved in advocacy and activism directly hostile to the Jewish State.We contacted JTNews editor Joel Magalnick who has so far declined to comment. Unfortunately this particular sin of omission is really one of many examples of the ambivalence displayed by the JTNews towards the importance and survival of the only Jewish state.

The Seattle Jewish Federation owned newspaper has displayed a pattern of troubling reportage. In August of 2013 the JTNews published a letter from Linda Frank, a woman who has accused the Israel Defense Forces of using snipers to murder Palestinian children. Even after being made aware of Frank’s scurrilous assertions the editor declared the non-Jewish Frank “a member of our community” worthy of inclusion  because she “is from Tacoma”.

The paper has placed anti-Israel activist Craig Corrie, father of the notorious Rachel Corrie on their cover carrying a placard comparing Israel to Apartheid South Africa. In an egregious failure of context, the paper failed to share with readers the identity or relevance of the person in the full color cover photo.

Shocking many, in their February 8, 2013 edition the paper provided a half page of space to apologists for an anti-Semitic assault on members of  Seattle’s Jewish community.

The JTNews editor may very well have been unaware of Glassman’s radical associations when publicizing this event, but that is perhaps the point. We at The Mike Report are very much aware of the hostility heaped upon the Jewish state, especially by those on the leftward side of the political spectrum. We presume that the JTNews staff look at words like “Jewish Renewal movement” and “social action” with little alarm; presuming that behind these words lie benevolent and lofty intentions. On the other hand the pairing of such words in a Jewish context is eyed with suspicion at The Mike Report as these are often the very code words used to camouflage less than kindly intent, as was the case here.

Glassman will visit Seattle on March 8th to conduct a workshop called “Living A Life That Matters,”. According to the JTNews the event is a joint collaboration between Bet Alef Meditative Synagogue and the Kadima Reconstructionist Community. Glassman’s Seattle visit is funded in part by a J-Kick campaign from the Jewish Federation of Greater Seattle.