The Tower Magazine is reporting that two members of J Street U’s Washington University chapter donned T-shirts celebrating convicted PFLP terrorist Leila Khaled at a J Street U sponsored campus event last year. On August 29, 1969, Khaled was part of a team that hijacked TWA Flight 840 on its way from Rome to Athens. The T-shirts were emblazoned with an image of Khaled clutching an AK47 machine gun and the words “Resistance is Not Terrorism”. 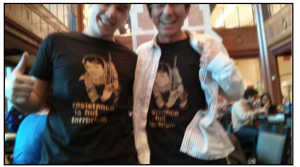 The allegations broke this morning when photos were discovered of the two students [Fadi AbuNe’meh and Taka Yamaguchi] wearing the shirts at an event sponsored by J Street U last April. In coverage of the event, AbuNe’meh is quoted as a representative of the group. In AbuNe’meh’s Facebook postings when asked where they acquired the shirts, he pointed to a vicious anti-Israel website called existenceisresitance.org.

The second student in the photo, Yamaguchi, was described as the moderator of the event. He has gone on record advocating for the ”full right of return” of Palestinians to pre-1967 Israel. “In some ways,” he has written, “the essence of being Palestinian today is the right of return itself: what we lost, and what we fight to regain.”

In full damage control mode, J Street U tried to distance themselves from their controversial campus leaders, issuing  a frantic, yet muddled  press release. The statement referenced a Facebook posting by Washington U student Taka Hiro, denying direct affiliation with J Street U.  The implication being that the students wearing the T-shirts are not directly affiliated with J Street U. In fact the one student referenced by J Street U, Taka Hiro is not one of the two J Street leaders who were photographed wearing the inciteful T-Shirts, why he was trotted out as exculpatory evidence for J Street U is a mystery.

Whatever their point, there is no denying, not even by J Street,  that two students advocating  violence against citizens of the Jewish State actively participated, promoted and led a J Street U co-sponsored event. In addition, Fadi AbuNe’meh and Taka Yamaguchi appeared  perfectly comfortable brandishing terror-icon attire  in that forum and none of the J Street U participants or  leaders present expressed public discomfort with the obscene display until  photos of the two were exposed this past week.

While J-Street broadcasts a sanitized version of their true essence for an all too eager to believe Jewish establishment, their true mission, the undermining of the Jewish state is laid bare for all with eyes willing to see.

More photos and details at The Tower Magazine and Truth Revolt.