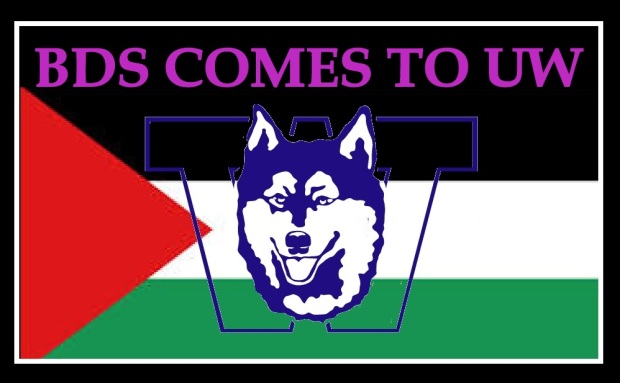 A build up that began this past November with a series of BDS sponsored  lectures and trainings has culminated in the official submission of an anti-Israel divestment resolution to be brought before the University of Washington student senate.  Similar BDS (Boycott, Divestment & Sanctions movement) campaigns across the United States have disrupted campus life, polarized the student body and in some cases descended into acts of intimidation and anti-semitism. As Jonathan Tobin notes in Commentary magazine…

The connection between anti-Semitic rhetoric and BDS is not an accident. At its core the movement is an expression of Jew hatred since it seeks to single out for special discrimination the one Jewish state in the world while disregarding every other possible human-rights issue elsewhere

In a flurry of coordinated activity SUPER-UW unveiled their divest from Israel campaign during the Jewish holiday of Passover, assuring a delayed response from the pro-Israel campus Jewish community.  Initiating their “Dawgs Divest” campaign on Monday, April 14th, the eve of the sacred Jewish observance, the anti-Israel activists directed supporters to an online petition demanding that the University of Washington divest from “companies that profit from the Israeli occupation of Palestine.”

Super-UW unveiled a Divest from Israel campaign, including this petition over the Passover holiday.

As the UW divestment campaign was rolled out a group of American academics threw in their support to the nascent operation.  A group of 37 professors and teachers from across the country issued the following statement on the radical online magazine, New Red Indian.

We, the undersigned faculty from universities around the country, salute and commend the efforts of Students United for Palestinian Equal Rights at the University of Washington, Seattle, to get the UW Student Senate to pass a measured and thoughtful motion to divest from corporations that profit from the Israeli occupation of Palestine… We therefore urge the Student Senate at the University of Washington, Seattle, to live up to these ethical principles and to pass the divestment resolution.

The UW Israel Divestment resolution R-20-39 titled “A Resolution to Divest from Companies Profiting from Violations of International Law and Human Rights”  was formally introduced on April 15th by Student Senator Peter Brannan [grieves@u.washington.edu]. 31 year old Brannan, a SUPER-UW activist and member of the Socialist slate, is a Senior at the University of Washington with a dual major in Biochemistry and Sociology.

The resolution reads in part…

WHEREAS, the state of Israel, in its ongoing occupation of Palestinian lands , violates International Law and Human Rights…

BE IT RESOLVED BY THE ASSOCIATED STUDENTS OF THE UNIVERSITY OF WASHINGTON: THAT, the ASUW requests the University of Washington to examine its financial assets to identify its investments in companies that provide equipment or services used to directly maintain, support, or profit from the Israeli occupation of Palestinian land, including a) the demolition of Palestinian homes and the development of illegal Israeli settlements; b) the building or maintenance of the Separation wall, outposts, and segregated roads and transportation systems on occupied Palestinian territory, and c) illegal use of weaponry and surveillance technology by the Israeli military against Palestinian civilian populations, and that those findings be shared with the ASUW…

THAT, the ASUW requests the University of Washington to instruct its investment managers to divest from those companies meeting such criteria within the bounds of their fiduciary duties until such companies cease the practices identified in this Resolution.

The Twitter feeds of various BDS advocates chimed in their support for the UW divestment resolution. 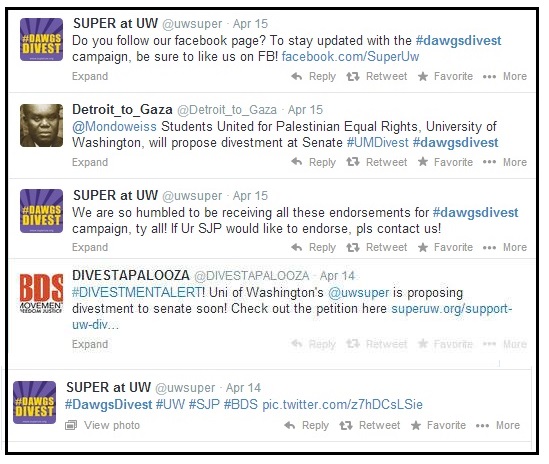 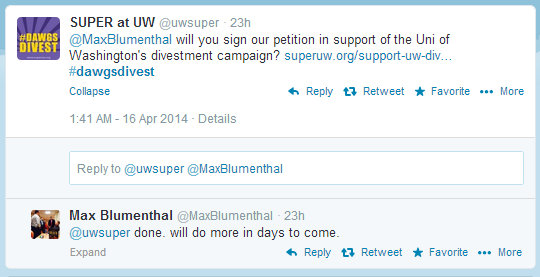 The Mike Report is following these events closely, we will inform our readers as soon as a date for a vote of the senate is known and will provide up to the minute updates as they become available. 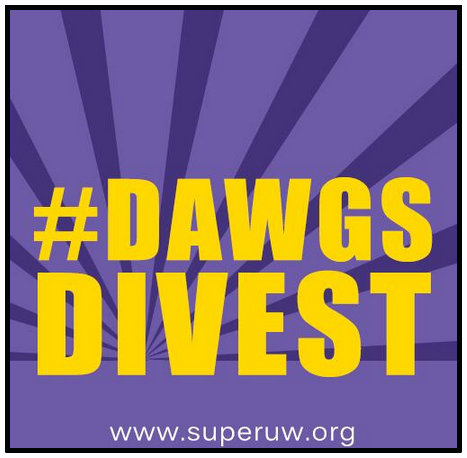 Super UW  unveiled their “Dawgs Divest” logo and campaign over the Passover holiday.