This past Sunday J Street’s Seattle chapter admirably declared on their Facebook page that the BDS movement is anti-Semitic. While this observation is not novel to most in the pro-Israel camp, it is a statement that up until now has not been heard from the ambiguously pro/anti-Israel J Street.

The Mike Report emailed J Street Seattle, lauding them for their brave stance. We asked J Street Seattle how they reconciled this  bold departure from previous J Street dogma in light of the organization’s ongoing associations with the BDS movement. We have yet to receive a response. 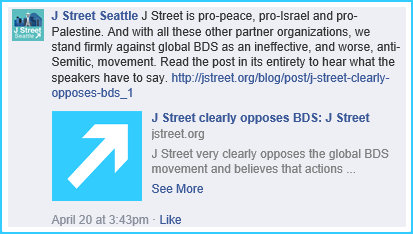 In fact J Street unapologetically collaborates with a slew of BDS affiliated organizations, most notably Students for Justice in Palestine and Jewish Voice for Peace (JVP).  Rebecca Vilkomerson, founder of the viciously anti-Israel JVP was invited to speak at the 2011 J Street Conference.  The list is a long and shameful one.

The Mike Report has been historically skeptical of J Street with its serial vacillations and obscene associations. That having been said; in light of J Street Seattle’s  co-sponsorship of an upcoming  community wide anti-BDS rally in Seattle and their condemnations of BDS as an anti-Semitic movement, we find ourselves in the strange position of (at least in this circumstance) extending a note of appreciation to J Street Seattle for calling out BDS as the modern day incarnation of an age old hatred. Well done.

It is our fervent hope that the national organization will soon follow suit.

The cartoon: For those not familiar with Star Trek (TOS). Captain Kirk was quite skilled in destroying evil computers and annoying Androids with logic based conundrums. That was the first thing that came to mind when pondering the inherent contradiction between J Street Seattle’s declaration that BDS is anti-Semitic and yet still engaging in cozy relations with them.