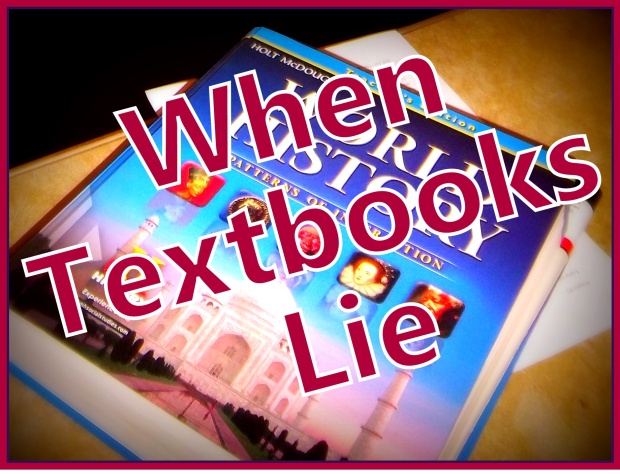 Imagine a High school textbook that distorts and minimizes the Jewish people’s historic connection to Israel. We are not speaking of the notorious textbooks of the Palestinian Authority, but rather of textbooks used to this day by the Seattle Public School District.

Robert “Bob” Kaufman, a semi-retired educator and longtime Israel advocate  has spent a lifetime immersed in the depths and details of Jewish history. He has engaged in dozens of debates with anti-Israel activists over the years, and is uniquely familiar with tired falsehoods peddled as fact.

When Kaufman told me there was a problem with the Seattle Public School curriculum I was eager to hear what he had to say. Upon arrival at his Seattle home I was ushered into his upstairs study. The walls were lined with history texts and reference materials, on his desk lay the textbook in question World History; Patterns of Interaction. Published by giant educational printing-house, Holt McDougal. The text is used by many Seattle Public Schools and other districts across the state and country.

Bob is one of those instantly likable fellows, well equipped with a kind smile, a listening ear and a  confident voice. Tonight there was distress in his voice. Kaufman had not yet gone public and was sharing his research and experiences publicly for the first time.

“A friend who knew I have some knowledge of the history was troubled by the Israel section in a particular high school textbook used by Seattle Public Schools” explained Kaufman. Upon delving into the text, Kaufman was appalled by what he found. The material appeared to be consciously skewed to amplify the Arab narrative while minimizing, even dismissing the Jewish narrative.

“For example” noted Kaufman, the textbook asserts “The land called Palestine now consists of Israel, the West Bank, and the Gaza Strip.” This is misleading; the Palestine mandate included all of what is now Jordan, Israel, the West Bank and the Gaza Strip. “Why is this relevant?”  asked Kaufman.  “Propaganda sheets put out by anti-Israel activists assert that “The Jews were given 78% of Palestine.  The truth is the Arabs were given the 78% of Palestine that is now the state of Jordan.  Add that to the land they were offered by the UN on the west side of the Jordan River, and the actual amount of Palestine in Jewish hands after the war of 1948 was no more than 17.5% of the original Palestine mandate. “

“The text gives students the false impression that Jews took the vast majority of lands in the Palestine Mandate, nothing could be further from the truth.”

On page 1020, the students are confronted with a heart wrenching tale of theft, loss and Jew inflicted misery. 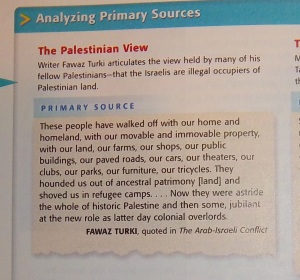 “They shoved us in refugee camps”

“These people have walked off with our home and homeland, with our movable and immovable property, with our land, our farms, our shops, our public buildings, our paved roads, our cars, our theaters, our clubs, our parks, our furniture, our tricycles.  They hounded us out of ancestral patrimony [land] and shoved us in refugee camps . . . “

“It is shocking how much of that paragraph is not true” said Kaufman, “No Palestinian Arabs were shoved into refugee camps by Israel, they can thank their Arab brothers for that.” Palestinians who did not flee Israel were given full citizenship rights, while those who fled into the hands of neighboring Arab countries languish there to this day.

The text goes on “Now they [The Jews] are astride the whole of historic Palestine, jubilant at the new role as latter day colonial overlords.”

This statement  is patently false “The Israelis have never possessed “the whole of historic Palestine”. Said Kaufman” In fact the bulk of the British Palestine Mandate is under Arab Jordanian rule. “These are historic facts, not opinions, bad information like this should not be dished out to impressionable young minds”. “In addition” says Kaufman “Israel is not a colony, the Jews were not dispatched to Israel on behalf of a mother country.  Israel was established not with the assistance of but rather in defiance of the colonial powers.”

“This is exasperating” said Kaufman. Today’s Palestinians are 100% Arab, most of whom migrated to Palestine in the 19th and 20th centuries, to assert that there was any Palestinian presence between 135 AD and the Arab invasion of 634 is absurd. To suggest that there was no Jewish presence after 135 AD is false”. Explains Kaufman “The text give the impression that Jews abrogated their claim to the land through their forced absence. In fact at no time in the last 2000 years has there been an absence of Jews from the land. Jews have continued to regard that land as their homeland”

Not in the textbook. Arab invasion of “Palestine” did not occur until the 7th Century. Most Palestinians arrived in the 19th and 20th century.

“The bias does not stop with the text” noted Kaufman, “the assignments given students when it comes to Israel are shockingly  rife with sins of commission and omission”. In one assignment students are asked how “Muslims and Christians already living” in Palestine might have reacted to the Balfour declaration, a 1917 British diplomatic statement of support for a Jewish homeland in Palestine?” “The Students were never informed that all 53 member states  of the League of Nations passed a mandate for a Jewish national home in Palestine. This legal Jewish  claim to the land is critical and yet is never mentioned in the textbook; I suspect this omission was deliberate”.  Said Kaufman “Balfour established nothing and it is easy to point that out. You can’t say that about the League mandate, so the authors simply leave it out”.

Armed with these and dozens more objectionable statements, half-truths and non-truths, in the history textbook, Kaufman wrangled a meeting with Shawna Heath, Executive Director of Curriculum and Instruction at Seattle Public Schools and Kathleen Vasquez, Literacy and Social Studies Program Manager at Seattle Public Schools. That meeting which took place this past January resulted in a meeting with the Heads of the Social Studies Department. “The condescension was palpable” noted Kaufman. “before I said a word one of the department heads asked me for my credentials”. Kaufman went on to  meticulously present the deficits in the textbook, point by point.

Not in the textbook. Only 1/4 of Palestine became the Jewish state.

“I told them that our students deserve to be exposed to factual and balanced information, not the dishonest propaganda of only one side.” Kaufman requested that” the  curriculum department post a notice that teachers are not to use this section of the book, or at least, to provide material from the Pro-Israel side along with it if they do use it.”  The committee offered little more than to provide teachers with a link to his material.

Kaufman recalled how for decades he would debate  Palestinian representative Zahi Haddad at Curtis High School in University Place outside Tacoma. Every year at the debate Haddad would like clockwork assert to the students  that “Jews control the media”. Recalled Kaufman “from my first debate in 1974 and for years afterwards the students would boo in disgust at this statement. In 1991 for the first time they cheered. It became increasingly difficult to engage in civil debate, Fahad objected to my handing out fact sheets to the students. Things came to a head in a debate a couple of years ago. Les Harrison, one of the department heads accused Kaufman of being “right wing” because he had claimed Jews have a right to be in Israel and placed the onus on the Palestinians for the absence of peace.

The school staff  became hostile, the students increasingly unwilling to listen until finally they asked Bob to stop coming. Lamented Kaufman; “It is clear to me that the hostility I encountered from students in those debates stems from textbooks like the one on review, and the attitudes of many, and I hope not all of the teachers presenting this material.  Our students deserve to be exposed to factual and balanced information, not the dishonest propaganda of only one side.”

The Puget Sound Region is not the only area  rife with textbook bias issue, a group of parent activist have been struggling for years to remove anti-Israel elements from textbooks in Newton, MA.

Kaufman is hopeful that when more people become aware of the seriousness of the issue, they will demand that changes be made and that the anti-Israel curriculum will  be excised from the lesson plans.

Said Kaufman “everybody is entitled to their own opinion but they don’t have the right to mislead our children with omissions and falsehoods”.

← Nothing else matters
Bringing out our best and worst →