Alison Weir of the anti-Semitic organization “If Americans Knew” speaks at University Methodist Church. The Mike Report contributor Randy Kessler was there and reports on what he saw.

Weir, dressed professionally with a soft tone and nicely styled haircut, founded IAK in 2001 to help “educate the American public on issues of major significance that are unreported, underreported, or misreported in the American media.”

She proceeded through a 90 minute PowerPoint presentation to explain exactly what that means.  In short, it’s the old story that the Jews (sorry, “the Zionists”) exert control over American foreign policy, which has led to the illegal occupation of a land that rightfully belongs to its indigenous people, the Palestinians.  Her organization is called “If Americans Knew” because she believes that once Americans know “the facts,” we will come to our senses and stop all of this madness.

A small sample of Weir’s product

Here are a few of the key points she made:

Israel is evil.  And so is the US.  Besides the fact that “Barack Obama is running the biggest terrorist organization in the world,” the Israelis specifically target Palestinian civilians.  Israel “intentionally created poverty, and it’s paid for with our money.”

The media is totally biased towards Israel.  She claimed that the deaths of Israeli children were much more reported than Palestinian children.  Even NPR was pro-Israel, according to Weir!  “We get such filtered coverage with so many omissions,” she said, concluding that this is what has caused the pro-Israel bias among Americans.

Everything was great until the Zionists came along.  Weir told of the Zionist infiltration into the US government starting in the 1910s, when Louis Brandeis was part of a “secret society” that ultimately influenced many sectors of society towards the Zionist cause (including President Woodrow Wilson), and dragged the US into World War I, so that once we won, Britain would reward the Zionists with control over Palestine.

Zionists control the US Congress.  Amassing massive financial means, Zionists organized to try to sway Congressional sympathy to the Zionist cause, and they were successful.  So successful, in fact, that any member of Congress who defies “The Israel Lobby” will be “taken down.”

By the end of Weir’s barrage, how could anyone consider Israel to be worthy of American support or sympathy? Her use of rhetorical techniques was effective, as she supported her claims with research that appeared to be reputable.  And she had the crowd of about 40 people, many of whom appeared to be social misfits and outsiders, riled up.

Her main point was that if Americans simply knew about all of this, and spoke up, we could turn the tide, and America would no longer support Israel with aid (such as funding for the Iron Dome), military cooperation, and supportive votes in the United Nations. 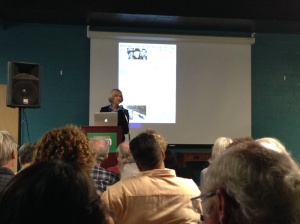 What Weir is missing is that Americans do know.  We know that Israel shares the same values of life, freedom, and peace that Americans do.  We know that it was not Israel who attacked the Twin Towers on 9/11, but radical Islam – the same radical Islam that threatens Israelis with rockets, terror tunnels, and murderous vitriol.  We know that Palestinian civilians are suffering tremendously, and that if the Palestinians had simply made different choices, their people could be thriving rather than suffering.  But she can’t see that, because in her mind, Zionists have succeeded in brainwashing an entire population.

While the Zionist enterprise has not been perfect, I believe in Israel’s fundamental righteousness.  I also realize that it’s impossible to know all the facts, to read all the books, or to win all the arguments.  So I went to this talk in order to hear how the other side frames it messages, and to learn.  Here are my key takeaways for readers:

We cannot take the strong US-Israel relationship for granted.  The other side is working every day to destabilize it, and they are inspired.  We need to be more inspired.

Randy Kessler describes himself as a Radically Moderate Left-Wing Conservative. He lives in the Puget Sound region and is a graduate of the University of Washington and Seattle University (where he earned his MBA).

Editor’s Note: We thank Randy for his dedication to exposing the underbelly of hatred that rots just beneath the organic Seattle soil. We would like to see our Jewish communal institutions take a more active interest in addressing the scourge of  local hate spewing churches  as well as the anti-Semitic tone of most of the recent anti-Israel rallies in the Puget Sound region.

14 thoughts on “Anti-Semitism in Seattle”