Warning: Some of the images on this page are graphic and disturbing. Scroll to bottom for terror group logos seen at Seattle Center yesterday.

I am not sure when we transitioned from “how did it happen” to “it is happening again”, yet near daily protests in the Seattle area have taken on the tone of rallies held 80 years ago on the European continent. The oldest hatred has crawled out from under whatever rock it was hiding and now feels safe and secure enough to shamelessly flaunt the most vile of messages on our downtown streets.

This Saturday morning, August 2nd, a coalition of anti-Israel groups operating under the name “Voices of Palestine” held a rally in Seattle’s Westlake Park attended by around 100 protesters. Seattle City Councilmember Kshama Sawant opened the gathering with words of encouragement for demonstrators and condemntation of the Jewish state. Depictions of Israeli flags with the Star of David replaced with a Swastika were proudly displayed.  A star of David smeared with bloody handprints was carried nearby. 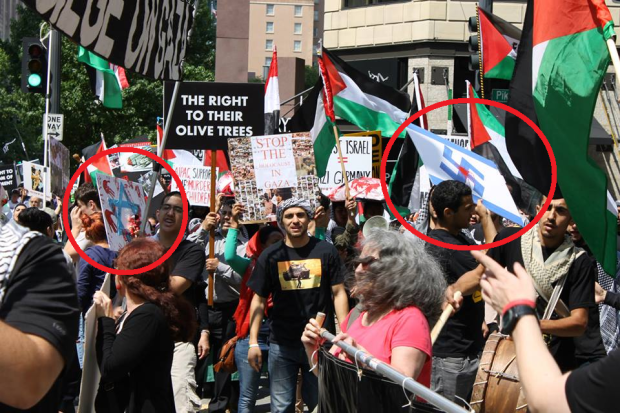 Evocations of the Holocaust and comparisons of Israel to Nazi Germany were ubiquitous. One person held a poster depicting Israeli Prime Minister as a Nazi with a Swastika band on his sleeve, another declared “Israelis are not the original people of the land”.

This particular rally took a turn more gruesome than even prior anti-Semitic demonstration held locally. If there was a single theme, it was that of the classic blood libel, depictions of Jews as baby killers were everywhere. A photo of Prime Minister Netanyahu with blood stained lips was hoisted above the crowd (Warning: Graphic and disturbing photo). 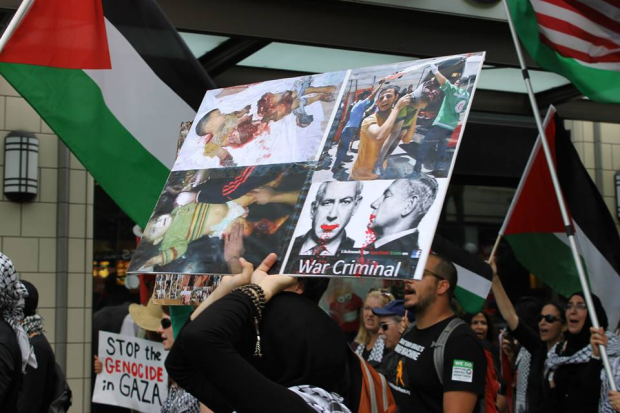 Several people held aloft bloody babies on a stick; a life size depiction of an infant wrapped in blood soaked funeral cloth was on display. 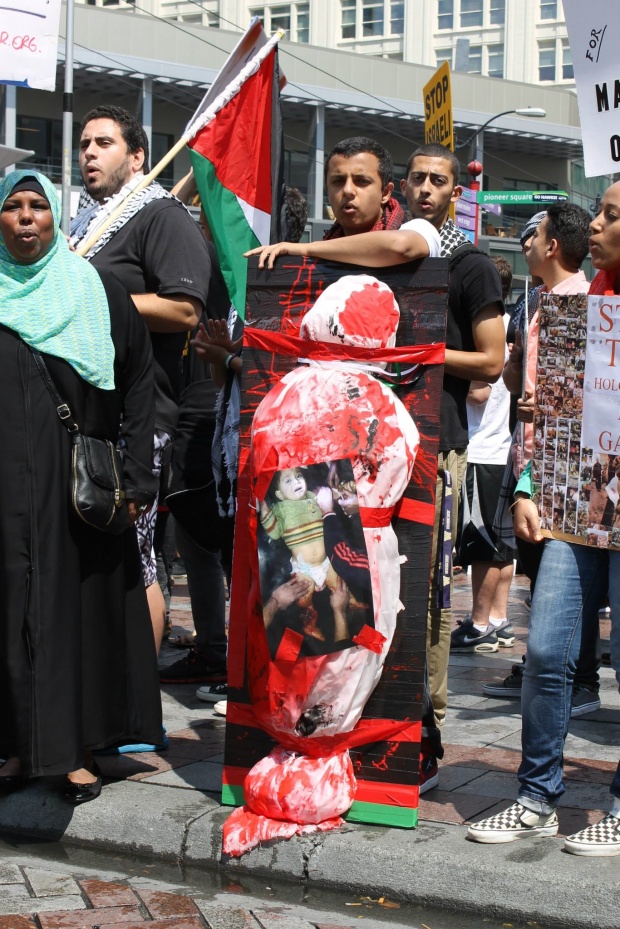 Last week the Jewish Federation held a well publicized press conference excoriating a gun rights advocate for evoking the Holocaust to support his agenda. Less than a mile from the Federation’s offices Jews were being depicted as Nazis, Swastikas were proudly on display and the Jewish people were being  defamed in a manner familiar to any student of history. Yet there has been no press conference to condemn this outrage, no public expression of shock and horror at this frightening assault on our community. Why not?

Hamas supporters also gathered at Seattle Center this weekend. Several of the posters used were identical to the ones shown above but the Seattle Center rally was even more open about advocating  for violence. Protesters chanted their wish for a Jew free Middle East “from the river (Jordan) to the sea (Mediterranean) Palestine will be free!” The four finger salute symbol of the violent Muslim Brotherhood Terrorist group were everywhere. 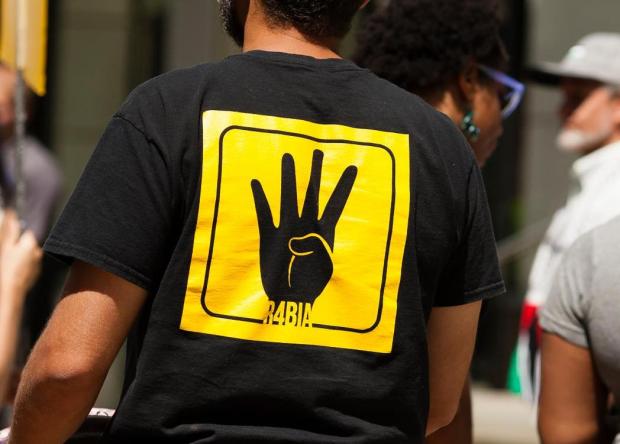 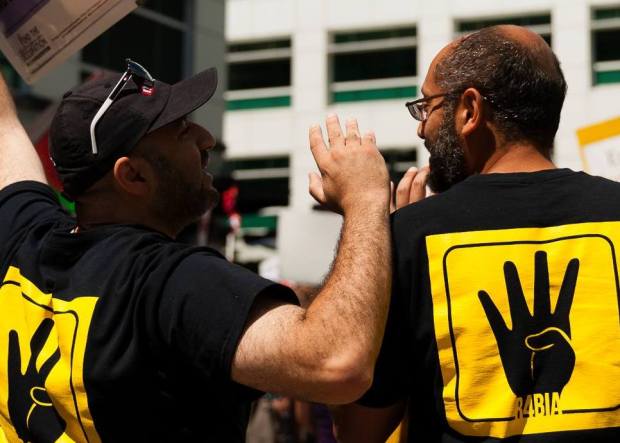 As was the logo of the armed wing of The PLO.

We agreed with this protester who correctly noted that only cowards kill kids. She seemed blissfully unaware of the irony in carrying this poster at a rally for the movement that invented using children as a weapon and treating them as a legitimate military target.

I thought they objected to Zionists, not Jews. Looks like this guy didn’t get the memo.

And of course the ever present comparison of  Jews to their Nazi tormentors.

All of these photos were taken this weekend. This is Seattle Washington in August of 2014.