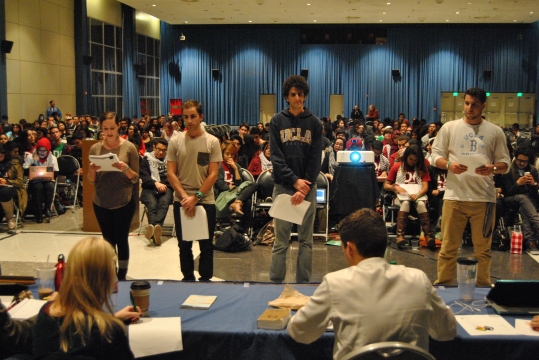 Avinoam Baral, a longtime Seattle resident, stood before the angry mob for an interminable hours long verbal barrage of  anti-Israel vitriol and not a small amount of the oldest hatred. As President of the UCLA Student government, Avinoam was prevented from speaking his mind as a resolution to divest from Israel and only Israel was “debated” by the student government.

Realizing they did not have the votes to fend off the resolution, Jewish UCLA students led by organizations like J Street U and Hillel strategized that the best offense was no defense.

The Los Angeles Jewish Journal reported that “prompted by a new strategy enacted by some of UCLA’s Jewish student groups, including Hillel at UCLA, Bruins for Israel and J-Street U, supporters of Israel effectively boycotted the hearing in an attempt to discredit and delegitimize UCLA’s strengthening pro-BDS movement. Only about 10 student representatives and members from those three organizations sat together during the hearing. While none of them participated in the public comment period that would have given the floor to dozens of divestment opponents in two-minute intervals, four of them made their case against divestment to the student government during a scripted 15-minute speech.”

“We are not going to have our community sit through however long a session of bullying and hate speech,” said Tammy Rubin in an interview before the hearing began. Rubin is the president emeritus of Hillel at UCLA. She said that unlike last year, Hillel at UCLA, Bruins for Israel and J-Street U will now use the time not spent on opposing symbolic divestment resolutions to “reinvest in our community.”

Parliamentary protocols required Baral to virtually sit in silence as one after another the accusations, and often falsehoods against the land of his birth filled the room. The Jewish Journal reported that “while the public comments coming from the pro-divestment side covered an enormously wide array of political grievances—from exploitative capitalism and U.S. drone strikes to discriminatory gender bathroom rules at UCLA and Chicano feminists—each settled on a similar opinion: UCLA should divest from American companies doing business in parts of Israel. Virtually every public comment was met with a sea of approving snaps and the occasional holler.”

As the kangaroo trial mercifully wound down, Baral could keep silent no longer. Fueled by the bravery of the persecuted millions of ancestors watching over his shoulders Baral let loose his indignation. “I’m going to say this, I think that Israel is what’s right about the Middle East, it’s honestly an incredible, incredible country and what’s been done there in a short 67 years is nothing short of astounding. And I’ll say this…. do not ever, ever frame this conflict as an indigenous versus non-indigenous [issue], and I don’t care where you stand on this issue because when you frame this issue in that way you’re saying that I don’t actually matter, that I don’t have a place in my homeland.

Following Avinoam’s remarks [full text below], the UCLA Student government voted 8-2 with two abstentions to divest from the Jewish State. Soon after,  UCLA Chancellor Gene Block released a statement, which reads in part: “UCLA and the UCLA Foundation share the Board of Regents conviction that divestment decisions should not hold any one organization or country to a different standard than any other. The Board of Regents does not support divestment in companies that engage in business with Israel and UCLA agrees with that position.”

“I just want to reflect as the only person on this council who is actually invested in this conversation in the sense that I am an Israeli citizen and that I was born in Israel 21 years ago, and I am extremely, extremely proud about it. And I’m going to say this, I think that Israel is what’s right about the Middle East, it’s honestly an incredible, incredible country and what’s been done there in a short 67 years is nothing short of astounding. And I’ll say this…. do not ever, ever frame this conflict as an indigenous versus non-indigenous [issue], and I don’t care where you stand on this issue because when you frame this issue in that way you’re saying that I don’t actually matter, that I don’t have a place in my homeland, and I would never, ever take that from anybody.

I’ll say this: being president actually sucks and being not able to really voice your opinion when you’re up here…. especially on a day like this, especially on a day like this it’s so hard for me to go back to my community that on the day that five people were murdered because they were Jewish in Israel, that I went and divested from companies that deal with the government of the Jewish state of Israel. It’s extremely difficult for me to go through that. And for myself as a personal note, I was born in a home in Katamon and the bus that I would take to school used to be 14 bus, and it’s now the 18 bus because there were so many suicide bombings on that bus that they changed the number of the bus to be 18 because that’s the numerical value for life.

It’s so hard to be here and it’s so hard be in this role and this is for the people that put me here and the people that I represent and the people that have done everything for me. I’m sorry, I’m sorry, I’m sorry, and I’m sorry that I couldn’t be there and represent you the way you wanted me to represent you, and I’m sorry that at the end of the day this council is going to go and say, and you know, we’re going to have this resolution that says in its language that it’s not meant to target you. But there’s a difference between intention and action, and if our intention is to divest from all companies that violate human rights, and the actual effect is to only divest from Israel, the only Jewish state in the world, it’s hard for me to take it any other way. It’s hard for me to not feel targeted, it’s hard for me to not feel like I don’t actually matter…. And it’s especially difficult when we talk about saying that we have this universal bar of standards, this standard that we’re not going to be invested in human rights violations and all we’re trying to do here is raise Israel to that standard, when in fact that’s just so false that I can’t even begin to explain it. Our standard is that we don’t give a shit. Our standard is that we’re invested in everything. Our standard is that we’re invested in every country in the world…. What we’re doing is raising Israel to a standard that we don’t apply to anybody else. And as a person who’s from Israel that’s really difficult for me to actually get behind.

I’m not going to delay this vote any longer. I hope to have a very successful term as USAC President. I hope and Mom, I know you’re watching, I hope I make you proud.”