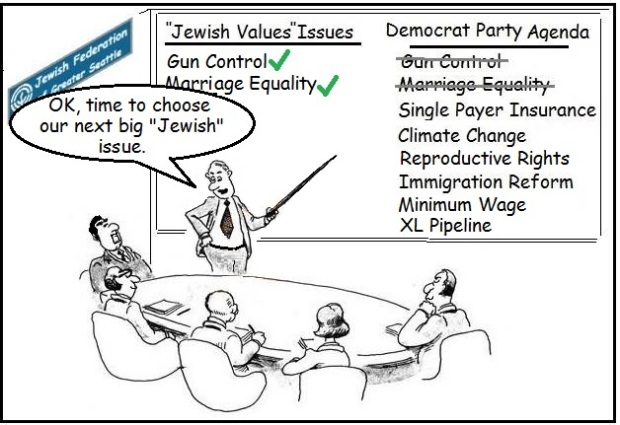 Zach Carstensen, Government Relations and Public Affairs Director for the Jewish Federation of Greater Seattle took a literary victory lap today, lauding the efforts of the Seattle Jewish Federation and their cadre of allies in the passage of Washington State gun control initiative I-594 this past November.

While perusing Carstensen’s gasconade, one senses there may be a bit of an overstatement of the difficulty involved in passing gun control legislation in a state that has more marijuana dispensaries than 7-Elevens and whose largest municipality treats plastic bags as contraband.

In a revealing article published (and well worth reading) in the progressive blog, Jewschool, Cartsensen flexed his communal muscles, forthrightly conflating the agenda of the Jewish Federation and JCRC with that of the left wing of the political spectrum.

“Federations and JCRCs are the only institutions that can transcend the differences within the Jewish world, manage the competing interests that exist within our own communities, and can harness robust political experience to enact the progressive policies needed in this new century.”

It is beyond the purview or realm of expertise for The Mike Report to take a position on culturally polarizing issues like gun control and the like. We can ponder though on the revelation that for better or for worse, at least one prominent leader in the Seattle Jewish Federation hierarchy openly and proudly fuses “progressive policies” with the goals of our central Jewish institution.

← Revered But Weathered Synagogue Building To Be Retired
Video: Canadian Indian Activist Stands Up for Israel at UC Davis →