Elie Pieprz; Telling The Settler’s Side Of The Story 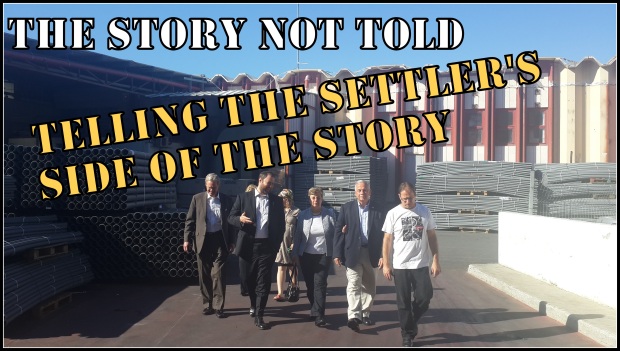 Elie Pieprz (second from the left) at a plastics factory in Barkan where Israelis & Palestinians work together. With Rep. Gene Green (TX-D) and Rep. Marsha Blackburn (TN-R) .

Elie Pieprz stood with his guests atop a water tower perched on a windswept hill, the highest point in the Samarian town of Beit-El. The tour he was giving to a group of State Legislators from South Carolina was running way behind schedule. It was dark and cold; out of deference to the dignitaries he sped up his presentation. “Over there is where God showed Abraham the land his children would inherit, there stands the ruins of a Maccabean fortress and a thousand meters in that direction is where it is believed Jacob had his dream”.

A short five years earlier, Pieprz was a community leader and successful political consultant residing with his wife Judith and three girls on Mercer Island, a lush, wooded suburb near Seattle. Their home life was as American as baseball and apple pie; his girls thought every family had a parade of local politicians traipsing through their homes at all days and hours. The Pieprz children can rattle off the names of America’s founding fathers as well as they can the names of all 54 weekly Torah portions. In all of their married years the idea of Aliyah, picking up and moving to Israel had not once come up in conversation between the young couple. That is until a Shabbat in 2009.

The Pieprz’s synagogue, Congregation Shevet Achim, had just joined the Orthodox Union (OU) and the organization dispatched Rabbi Daniel Korobkin to join the Mercer Island Jewish community for a Shabbaton weekend. “We hosted Rabbi Korobkin for Shabbat, and had a Friday night discussion about Jewish philosophy that lasted until well after midnight” recalled Elie. “While we did not touch on Israel or aliyah, my wife and I both realized that we had not had such a profound Shabbos experience since we had been in post High School yeshiva and seminary in Israel”.

The couple were energized by that special Shabbat, coming to the conclusion that a higher level of spiritual living was attainable and worth pursuing. Recalls Elie “it was just a matter of weeks before we had our first Nefesh B’ Nefesh interview”, quickly followed by a pilot trip to what would become their new home. Nefesh B’ Nefesh assists in negotiating the sometimes befuddling process of making Aliyah.

We are both very patriotic Americans – it was hard to think that we could move on without that part of our lives.

Elie mused of those hectic days, “we are both very patriotic Americans, and were quite involved in local politics – often hosting elected official and candidates at our Shabbos table. So it was hard to think that we could move on without that part of our lives”. But move on they did.

“The girls were very excited about the move, and were always watching Nefesh B’ Nefesh videos and getting psyched” said Elie. But the Pieprzs knew that moving to Israel would  come with challenges. Despite their positive attitude, “the move turned out to be  hard for the girls” confessed Elie. “Hebrew has proven to be difficult, the culture is different, and the schools just did not work for our girls.” The family had originally moved to Alon Shvut, a larger town just a bit Southwest of Jerusalem. While in love with the people and the place, the family decided that their children needed a smaller community,  so after a year and a half they relocated to the smaller, tight knit (and Anglo) community of Ginot Shomron (about 50 miles North of Jerusalem). This has proved to be a better fit.

We did not make aliyah to become Israeli – but to become more Jewish.

As to living in an English speaking bubble, Elie acknowledged “We did not make aliyah to become Israeli – but to become more Jewish. We were not rejecting America but embracing a cohesive, organic Judaism that you can only get by living in Israel”. 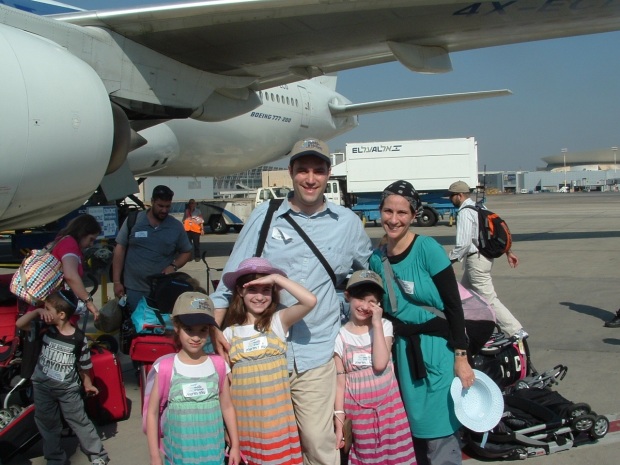 As the rest of his family acclimated to their new environment, Elie embraced the many exciting opportunities available to an energetic, outgoing person such as himself. Since making Aliyah he has produced a Television program called Tuesday Night Live in Jerusalem and founded iVoteIsrael, an organization that helps Americans in Israel to vote in US elections. His comfort in the political realm, along with his sincere, genuine demeanor made him ideal for his current position, Director of External Relations for the YESHA Council, the umbrella governing organization of the Jewish communities of Judea and Samaria.

One of the primary challenges Israelis face is the lack of honesty in discourse surrounding “the Settlements”. Critics of Israel, whether in politics or the media, disregard or are simply unaware of the indigenous, historic, religious and cultural connections to the Jewish heartland. The best part of the job for Elie is taking politicians, journalists and other “influentials” to see the Jewish communities of Judea and Samaria for themselves. Elie is excited to show the “real West Bank” with anybody wanting to see it. He has even hosted delegations of  harsh Jewish critics of Israel from groups like J Street and “Extend“. For Elie, passing on the Jewish narrative is easy because as he explains, he is simply sharing the truth.

“The most common misconception” observed Elie “is that we are a bunch of ‘messianics’ living in trailers with semi-automatics lookin’ to hunt me some Arabs.  The fact is, that we are very diverse, from a religious perspective a full 30% of us are secular Jews, mashiach is not part of their thought process”.

It’s kind of sad that inter-religious shopping is a stop on a tour.

One of the more surprising aspects for visitors  to Judea and Samaria is how interweaved  the lives of Jews and Arabs are. “Coexistence is an inevitable theme of our tours ” Elie shared.  “When we visit an industrial park, they see how Jews and Arabs work together, when we visit  Ariel University they see how we study together, even a visit to a grocery store will show how we shop together. It’s kind of sad” he lamented, “that inter-religious shopping is a stop on a tour, but most visitors don’t believe that it happens or that it is possible”. 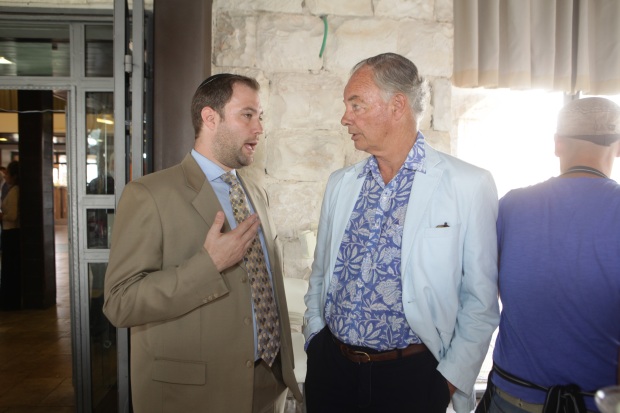 “Another huge misconception is the size” says Elie. “People don’t realize that more than 92% of all Judea & Samaria (the West Bank) is undeveloped. The impression you get from the media is that we are all over each other and that there is barely any room to breathe, and that with each additional Israeli home being built we are evicting some poor Palestinian. It is just not true.”

A culture of coexistence is viable.

After last year’s famous SodaStream Super Bowl ad, Elie escorted New York Times Jerusalem bureau chief Jodi Rudoren and bureau chiefs from CNN and a few other outlets on tours of other factories where Israelis and Palestinians work side by side “to demonstrate that SodaStream is not unique and a culture of coexistence is viable.”

Pieprz related of Rudoren, “She was professional, perfectly pleasant, and curious about many random things – the meanings of first names. She honestly feels that Israel is the Goliath and her job is to protect the “poor Palestinians”. She had a lot of material to write on that would have made for a very positive piece, but she just ignored it and wrote a neutral piece“. Considering her prior reportage, Elie considered her “neutral” article “a win in my book”.

Israel’s critics often claim that  the secular Jewish residents of Judea and Samaria moved there to benefit from sweet government incentives and subsidies. Elie says that this is not accurate. “Whatever incentives there were have long ago dried up. The people who live here are strongly Zionist and patriotic, they consider this their home, that is why they are here”.

This is part of what Pieprz shared with Keith Ellison, the lone Muslim member of the US Congress. Of that tour Elie remembers “Congressman Ellison was engaged although his staff was very uncomfortable with the entire situation. Ellison later did an interview about his experience with us. Ellison told the reporter that if he expects Israel to treat Muslims fairly, in a future Palestinian state, Jews should be afforded the same rights. I think that is about as good a result as I could hope for” concluded Elie. 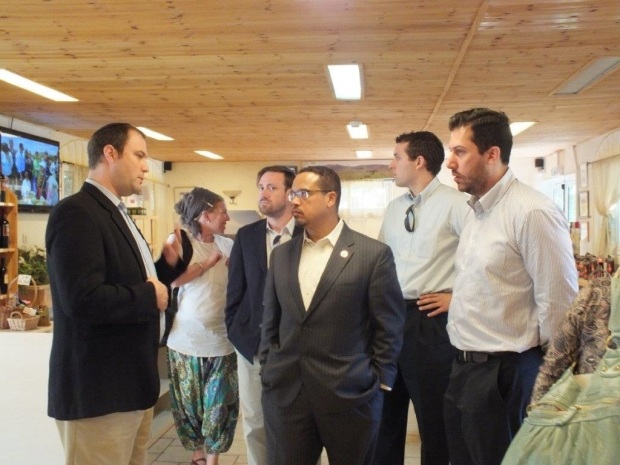 But not all of Elie’s guests are critics of the Jewish state, Congressman Dave Reichert of Washington state came with other Puget Sound first responders, cops, firefighters and EMTs. “We went to Chevron, and viewed how the Israeli population is kept safe, says Elie. “We also took them to Alfei Menashe, an old Jordanian strategic post”.  Elie showed the congressman how surrendering this strategic lookout would leave Israel’s population center completely exposed. “From this spot we could see Tel Aviv, Ben Gurion Airport and even good old Microsoft (in Ra’anana), just a 15 minute drive away.”

Elie, (third from the left) with Rep. Dave Reichert (fourth from left)and Seattle & Eastside first responders in front of the Mearat HaMachpelah.

Does he miss Seattle? “I miss my friends, I miss the I-90 floating bridge! The beauty of Puget Sound is irreplaceable.” When I asked Elie to share a favorite Israel experience he told us, “really every day is awesome”. And the most surprising fact about the Jewish residents of Judea and Samaria? “We are a very ‘entrepreneurial’ bunch. Not necessarily building businesses, but overcoming obstacles, persevering, and moving forward where most would just say – hey it’s not worth it and move back to Tel Aviv”.

In the beginning of this article Elie spoke of cutting short a tour of Beit El with a delegation of legislators from South Carolina. They were standing atop a water tower overlooking the biblical landscape, but it was cold and dark so he sent the group back to their hotel. Very early the next morning Elie Received a phone call from the delegation leader, the group wanted to know if he would consider picking up the tour where he left off the night before. “They were ready to cancel their scheduled tour of Masada and the Dead Sea to return to Beit E.  Of course I said yes.  It turns out they wanted to see the place of  Jacob’s dream in broad daylight”. Which is really what Elie is doing, shining some much needed daylight on a subject often shrouded in darkness.

Correction: Keith Ellison is one of two Muslim members of Congress, Rep. Andre Carson of Indiana is the other. H/T Randy Kessler

← Controversial Pro-Israel Film To Have Portland Premiere
Exclusive Interview: New Film Takes You Behind the Scenes with the IDF →

3 thoughts on “Elie Pieprz; Telling The Settler’s Side Of The Story”