The Reluctant Oleh Updates Us: An Interview With An IDF Soldier

Shana with her parents (Jon and Leah Jacobson) at Shana’s graduation from training.

In October of last year, then 19 year old Seattle native, Shana Jacobson, shared the story of her “reluctant” Aliyah with an honesty and openness that resonated with TMR readers. Since then we have received several requests for an update from Shana and she was kind enough to agree.

The Mike Report (TMR): Six months ago, on the eve of your leaving Israel to begin your college studies in New York, you surprised, well everyone, by joining the IDF (with a plan to be assigned to the foreign affairs unit). What has happened since then?

Shana Jacobson (SJ): Last Tuesday I finished my course!  The way it works in the army is first you do basic training and then a “course” specific to your job, and then the job. In the end I didn’t join a foreign affairs unit, I have a job with a program called Sar-El. The program brings volunteers from out of the country (ages 16-95!) to volunteer on army bases for 1-3 weeks, my job is to be their instructor/officer. (Even though technically I’m not an officer I’m ranked as one and I get a green rope (aiguillette) and everything! This Sunday I start with a group already!

SJ: The white pin is is a SarEl pin that only the instructors get (volunteers get a blue one). The dark blue pin and the shoulder tag with the logo (as well as the green beret on my shoulder) are for the Logistics Corps which the Sar-El program is part of. Last and most exciting is the green cord for being an instructor!

SJ: Training was tough. I got the culture shock of my life spending three weeks with a rainbow of different Israelis. Looking back I can say it was fun, but in the moment there was nothing worse than Saturday nights at home, packing my bag to leave Sunday morning for another week.

I got the culture shock of my life spending three weeks with a rainbow of different Israelis.

TMR: What do they teach you in the training?

SJ: I learned the basics of the army and all its rules and stigmas and some history, how to use an M16, and that if you shower in the morning not only will you have the bathroom to yourself but also hot water! The officers are really strict about discipline and every time you talk to them you have to say hakshev hamefakedet! which literally translates to attention officer! but it a just the formal way of doing things.

TMR: What were some of the difficult parts of the training?

SJ:  The entire time is lining up and counting down seconds and if you get to zero and you’re still moving you have to start over. If it’s windy outside and you want to move your hair out of your face, you have to ask them or risk making everyone start the countdown again. M16 week was horrible, as cool as it sounds. They gave us long M16 rifle which bumped on the stairs as I walked! I had to take it to the bathroom, shower mess hall and sleep with it under my mattress!

I obviously have an endless supply of Starbucks coffee Vias.

TMR: How is the food in the IDF?

SJ: The food is basically what you would expect from the army. Breakfast and dinner are always the same: sliced cucumber and tomato, cottage cheese and hard boiled eggs. Lunch is usually meat, and by meat I mean different forms of schnitzel (boneless chicken cutlets) depending on the day. For side dishes they have pasta, rice and/or potatoes so you get to leave every meal feeling like a brick. There’s also sliced bread at every meal and if you’re lucky chocolate milk in a bag! I obviously have an endless supply of Starbucks coffee Vias for the morning and usually a Cliff bar too.

TMR: How often do you get to go home?

SJ: I usually get to go home every Friday after going in on Sunday mornings, but this past Friday I came home after being on base for 21 days!! Thankfully that NEVER happens and this was just a situation that was unavoidable but inevitable because of the way the universe treats my life. When I begin the actual job though (this Sunday!!) I come home every Thursday which is the best part of my job. 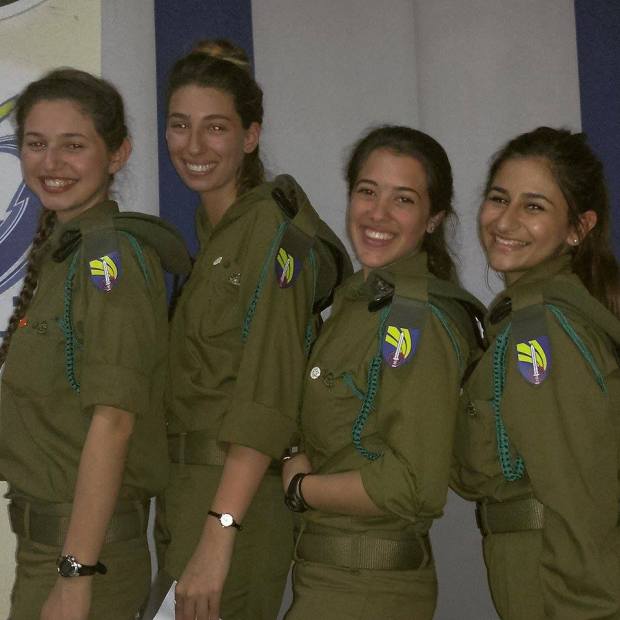 Shana and friends at their graduation from training.

They scream and cry and laugh like hyenas at 6 in the morning when you haven’t fully woken up yet.

SJ: When I was first thrown into close quarters with a bunch of strangers I was a little shy of miserable, especially because they’re Israeli strangers who scream and cry and laugh like hyenas at 6 in the morning when you haven’t fully woken up yet. I’ve made good friends though over basic training and the course. A lot of them are Israeli but they all speak English. I’ll be with them for all of my service so it’s good I don’t hate anyone yet!

TMR: What was the biggest surprise for you in the IDF?

I think the biggest surprise for me is how normal everyone seems.

SJ: I think the biggest surprise for me is how normal everyone seems (with some exceptions). In my experience living in Israel, and anyone who has ever been here probably knows this, there are soldiers everywhere. Seeing them on the street is always exciting and you think about how cool they are and all the things they probably know, but now that I’m like that I realize that not everyone is as good looking as they were before I was in a uniform also! And I don’t know anything close to sensitive information like I assumed all soldiers did who walked around in a uniform. It’s funny that they’re just normal people who happen to be at this unavoidable part of their life and that sounds lame and a little ditzy on my part but it was a little shocking to realize not everyone in the army knows what they’re doing and everything about the country.

Mom and dad saying farewell to Shana as she heads off for the army.

TMR: Aside from that, has the army experience been what you expected?

Tell people about Sar-El and tell them to come volunteer with us!

TMR: What can we do here in the USA to support you and your fellow soldiers?

SJ: It was so nice to get Purim cards from schools and little kids actually for support. So cards on the holidays are great. Also tell people about Sar-El and tell them to come volunteer with us! 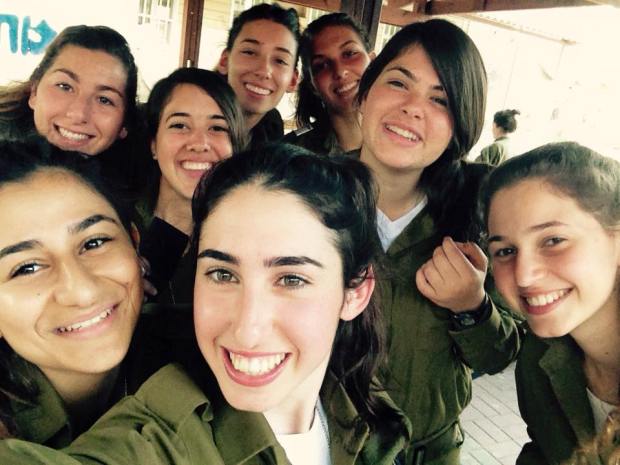 Shana (back row, second from left) and friends.

TMR: Has it been difficult to adjust to being considered a superstar hero by most all of us in Seattle?

SJ: Yes, in answer to your question the superstar life is hard. But not only in Seattle! My dad shared your last article with a friend of his who shared it on her own Facebook and my friends in Ra‘anana read it too! It was hard escaping all the paparazzi after that, but I made it through.

TMR: What are your plans for after you complete your army service?

SJ: I have a year and 10 months left to go!! Still a baby soldier. I haven’t thought about afterwards so much yet because I figure I have a while and things can and probably will change over the next two years. Following Israeli tradition I’d like to travel a bunch when I get out. Because I was drafted in January I’ll also get out around then which means I have a solid chunk of time if I decide I want to start school the next fall. That’s as far as I’ve gotten with the plans for afterwards, though, nothing is close to decided or official. And of course eventually my plan will always be to end up in Seattle, even if I’m not sure when or how or what I’ll be doing!

You can find out more about the Sar-El Volunteers for Israel program by going to their website at this link.