“WE DON’T CONDONE ANTI-SEMITISM OR VIOLENCE OF ANY KIND”

Readers of The Mike Report expressed shock and disbelief upon learning that Rabbi David Basior and his Kadima Congregation were using a Purim party to raise funds for ‘Youth Against Settlements’, an organization that bills itself as ‘non-violent’ while promoting violence against Jews along with anti-Semitic canards. Thus for some it felt like insult added to injury when the Seattle Jewish Federation publicized that same Kadima event on their website. 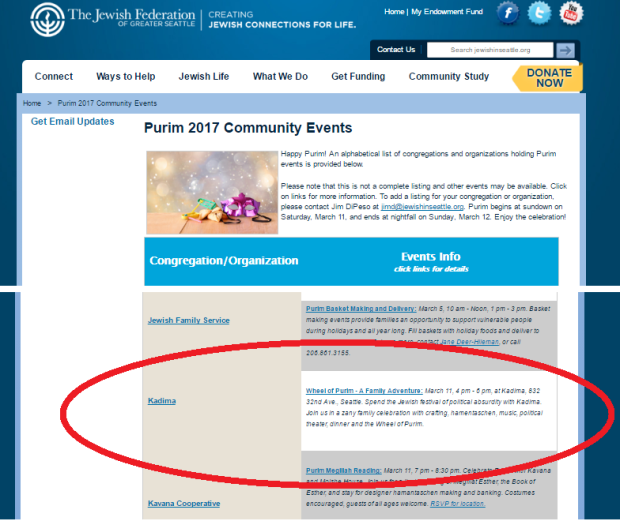 Once realizing the nature of Kadima’s Purim event, the Seattle Jewish Federation deleted the above promotional link from their website.

TMR reached out to the Federation asking for an explanation as to how the Puget Sound’s central Jewish institution could promote an event so clearly antithetical to their mission. Maxima Patashnik, the Federation’s Government and Community Affairs Manager responded, telling TMR that the inclusion of Kadima’s event was in fact an oversight. Patashnik noted that Kadima’s “Topsy Turvy Purim has since been removed from our calendar and we are reviewing our internal processes to ensure that this does not happen again”. Patashnik explained that the Federation as a matter of policy does not support or promote the Boycott, Divestment and Sanctions (BDS) movement and as a 501c3 is not allowed to support politically partisan activities. The Kadima event violated both of these standards by raising funds for a BDS connected organization while theming the event as “resistance” against the sitting President.

Kadima’s Rabbi David Basior has courted controversy since taking the helm of the congregation in 2015. He has zealously promoted the boycott, divestment and sanction (BDS) movement, a movement defined by former Federation CEO Keith Dvorchik and other community leaders as anti-Semitic. Rabbi Basior is organizing a delegation of Jewish Seattleites to join him in Hebron, Israel this May to engage in ‘direct action’ against the IDF.

The Federation’s Patashnik declined to comment specifically regarding Kadima’s fund raising for a group that promotes violence and anti-Semitism, but offered “I can say we don’t condone anti-Semitism or violence of any kind.”

The full Federation statement is below.

The Jewish Federation of Greater Seattle recognizes the wide diversity of opinion in our community on many issues. We cast as broad a net as possible in the publication of Jewish community events on our calendar. However, as a 501c3 Federation must remain nonpartisan. And, in foreign policy we draw the line at the Boycott Divestment and Sanctioning of Israel.

Therefore, Federation leadership decided not to include Topsy Turvy Purim on our community calendar due to two main concerns:

Unfortunately, due to an internal communication error, this decision was not relayed to the proper staff in a timely manner. Topsy Turvy Purim has since been removed from our calendar and we are reviewing our internal processes to ensure that this does not happen again.