Under the leadership of Rabbi David Basior, Seattle’s Kadima congregation has expanded their Israel related programming with a vengeance. Using lofty catchwords like “sharing our truths”, “openness” and “compassionate-listening”, the synagogue’s Israel programming comes in one flavor only, anti-Israel.

Hot on the heels of a  Purim fund raiser for the anti-Semitic group Youth against Settlements, and Rabbi Basior’s current junket  to engage in ‘direct action’ against the Jewish state, this afternoon Kadima hosted the discredited anti-Zionist historian, Ilan Pappe. 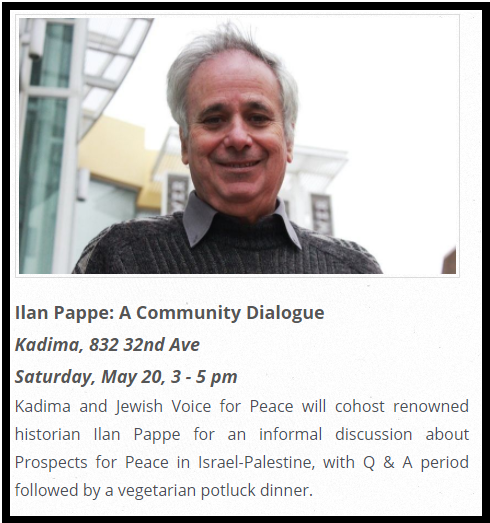 Co-sponsoring the Pappe lecture with Kadima was Jewish Voice for Peace, an anti-Israel, pro-BDS organization that hosted convicted Palestinian terrorist Rasmea Odeh at their recent national conference. Odeh  was convicted by Israeli courts for her role in the murder of two Jewish students, Leon Kanner and Eddie Joffe in the bombing of a Jerusalem Supermarket.

Ilan Pappe “harbors deep animus towards the Jewish state, has publicly called for its elimination, and engages in activities to harm its citizens”. – Professor Tammi Rossman-Benjamin

The Mike Report reached out to Professor Tammi Rossman-Benjamin,  a lecturer at the University of California Santa Cruz, co-founder of AMCHA Initiative, and an expert on anti-Semitism. Professor Rossman-Benjamin describes Pappe as “an Israeli Jew who harbors deep animus towards the Jewish state, has publicly called for its elimination, and engages in activities to harm its citizens, such as a campaign to boycott Israeli academics, which he helped to found.”  In addition, says Rossman-Benjamin, “he openly supports the terrorist organization Hamas and falsely accuses Israel of “crimes against humanity,” including “genocide” and “ethnic cleansing”.” 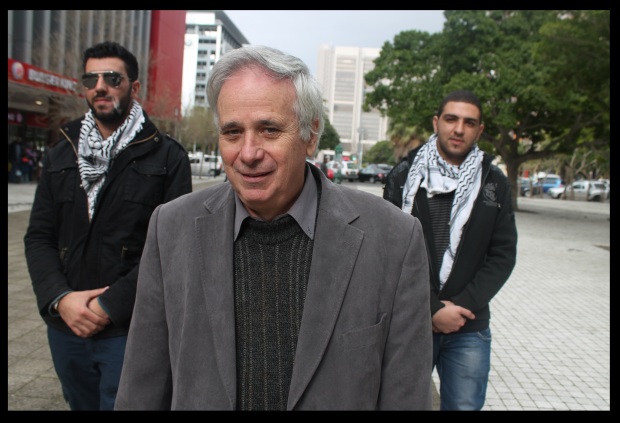 Ilan Pappe flanked by his Palestinian “security guards” at a 2014 visit to South Africa.

It is difficult to fathom, what, other than his anti-Zionist, pro-BDS credentials, would lead Kadima to honor Pappe with a speaking engagement. Professor Benny Morris, one of the world’s most esteemed Middle East historians described Pappe in an article in New Republic as “at best”, “one of the world’s sloppiest historians; at worst, one of the most dishonest.”

Ilan Pappe is “at best”, “one of the world’s sloppiest historians; at worst, one of the most dishonest.” -Professor Benny Morris

Of  Pappe’s book The Ethnic Cleansing of Palestine, says Morris, “distortions, large and small, characterize almost every page”. Professor Morris noted that Pappe “often omits and ignores significant evidence”, “alleges that a source tells us the opposite of what it in fact says, but he will also simply and straightforwardly falsify evidence.” “To the deliberate slanting of history” says Morris,  “Pappe adds a profound ignorance of basic facts. Together these sins and deficiencies render his “histories” worthless as representations of the past.”

While Pappe’s anti-Israel pontifications may be worthless as history, they are very useful as tools to demonize and marginalize the Jewish people and the only Jewish state. That a Jewish congregation like Kadima eagerly colludes in this endeavor is troubling indeed.

← Phony ‘Peace Activists’ Not So Peaceful
Alternate View: Jewish Activist Talks About Her Resistance To Occupation →