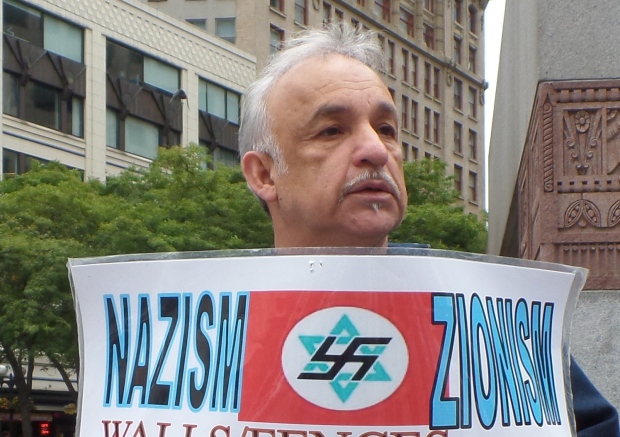 A gathering of about fifty anti-Israel activists assembled on a blustery summer afternoon in Downtown Seattle’s Westlake Park this past Friday to condemn Israel as part of the Al Quds Day observances, the annual day dedicated to the destruction of the Jewish State.  The International Day of Al Quds as it is officially known,  originated in the Islamic Republic of Iran in 1979 and is held on the last Friday of Ramadan. While millions gathered in the Iranian capital of Tehran to denounce Zionism and the United States on Friday, a smaller crowd totalling about fifty, assembled on the Corner of 4th and Pine.

Of those in attendance, the overwhelming majority appeared to be religious Muslims. 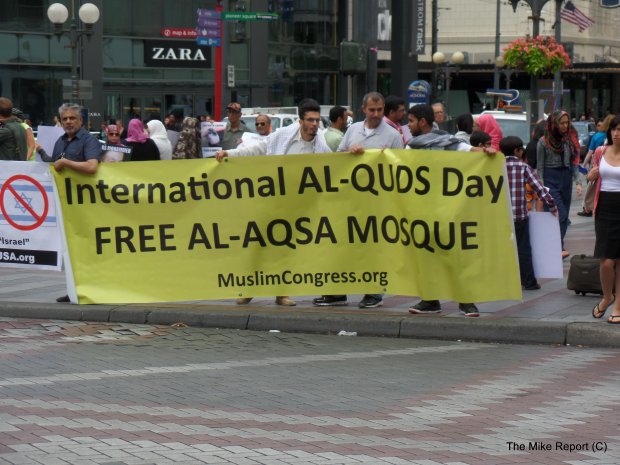 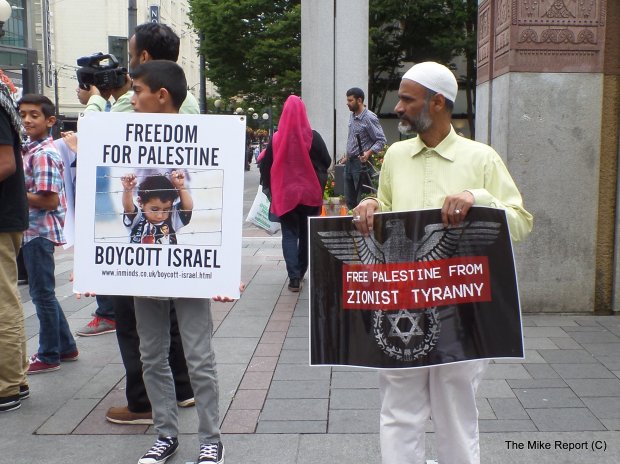 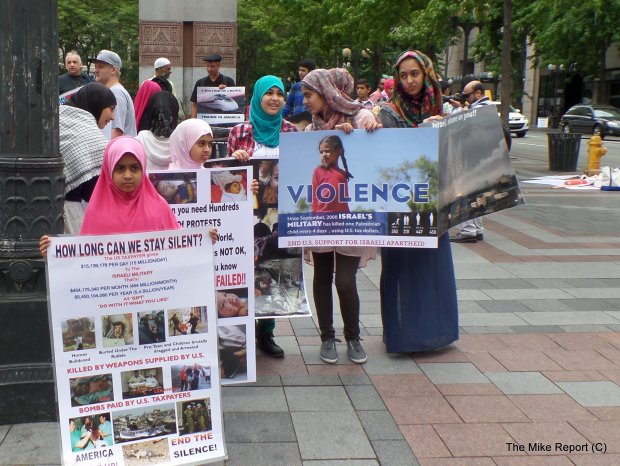 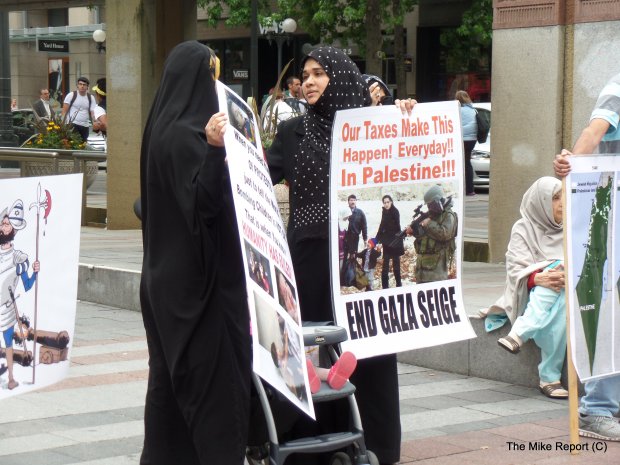 There was a smattering of the most dedicated secular anti-Israel activists in attendance, but they were few and far between. 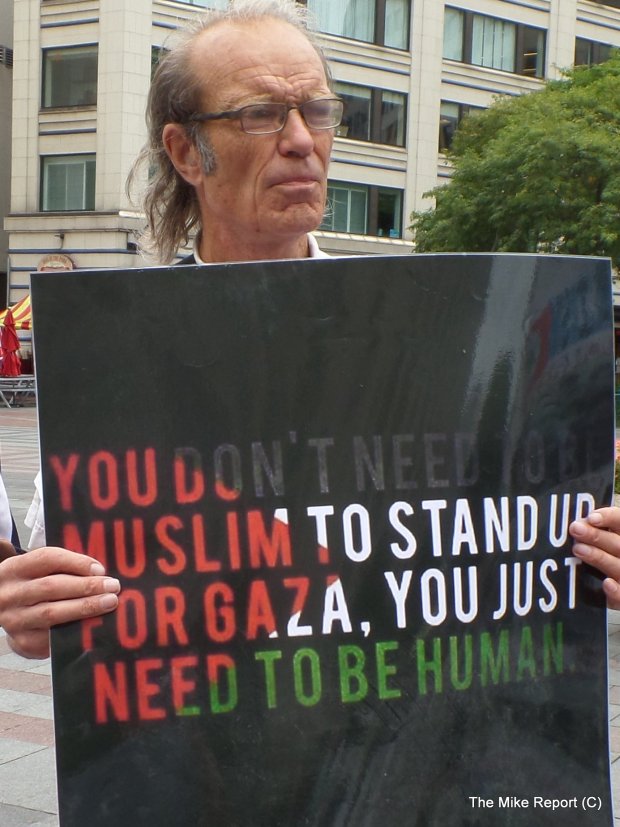 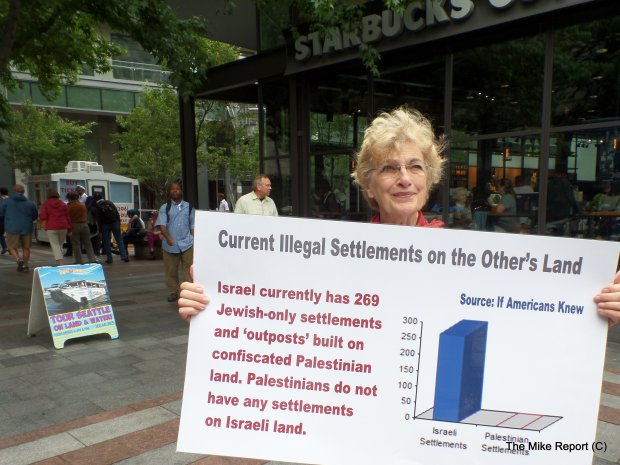 High school age girls in traditional Islamic garb took the lead in chanting various rhyming calls for Israel’s violent destruction such as “from the river to the sea, Palestine will be free” and “resistance is justified when people are occupied”. 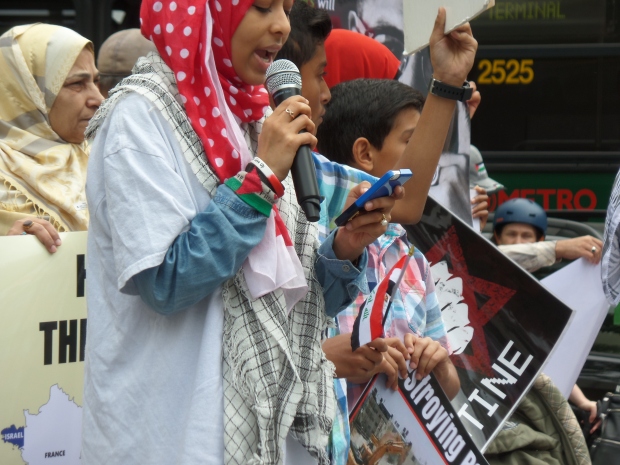 Signage at Seattle’s 2015 Al Quds Day rally featured gruesome, blood soaked images of questionable origin along with repeated comparisons of the Jewish State to Nazi Germany. During the 2014 Gaza War anti-Semitic posters so permeated the anti-Israel rallies at Westlake Center that the ADL and Seattle Jewish Federation were forced to issue a press release condemning such displays. 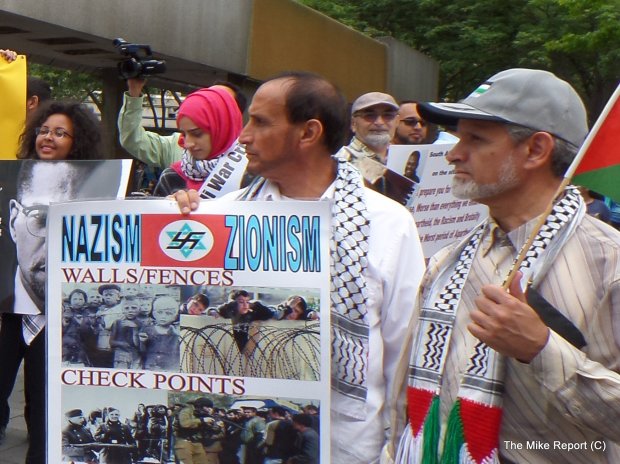 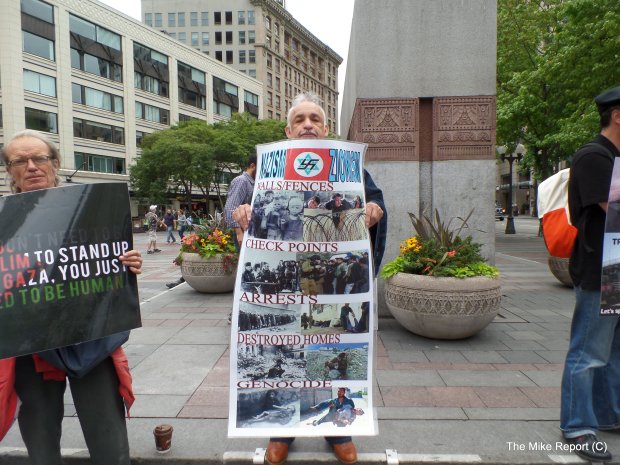 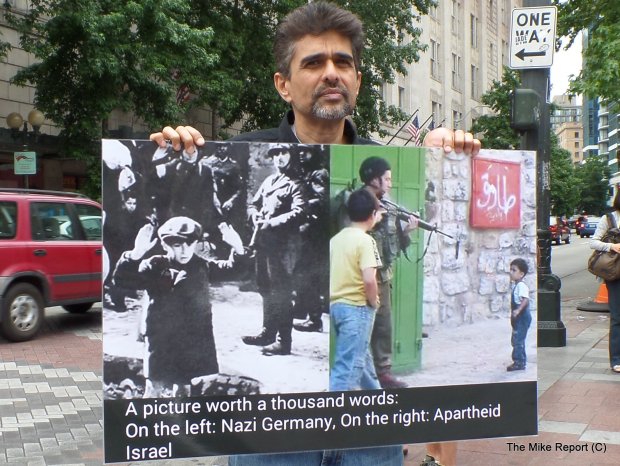 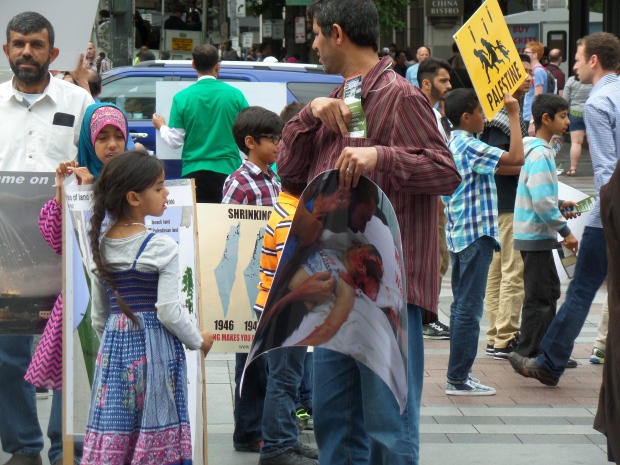 The keynote speaker at the Friday rally was Rabbi for hire, Yisroel Dovid Weiss of the miniscule Neturai Karta organization. 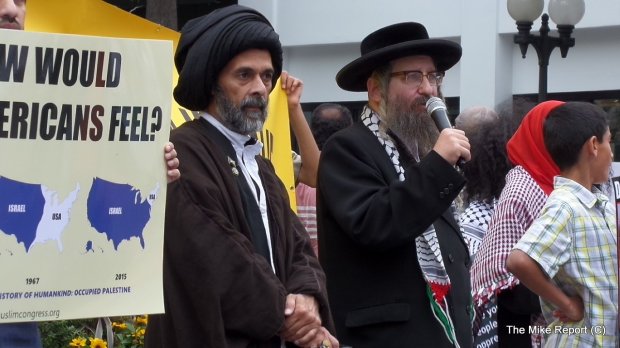 Not unlike Jewish Voice for Peace, Weiss serves as a Jew for hire to shield extremists from allegations of Jew hatred at brazenly anti-Semitic events. Weiss earned his fifteen minutes of fame in 2006 when he and his organization participated in a 2006 Holocaust denial conference in Tehran, Iran. At Friday’s rally, Weiss spoke of the Jewish debt to the Islamic world for sheltering the Jewish people in brotherly kindness for many centuries, until the “murderous, Satanic” Zionists created a rift between the two peoples. His organization calls for the “dismantling” of the Jewish state. 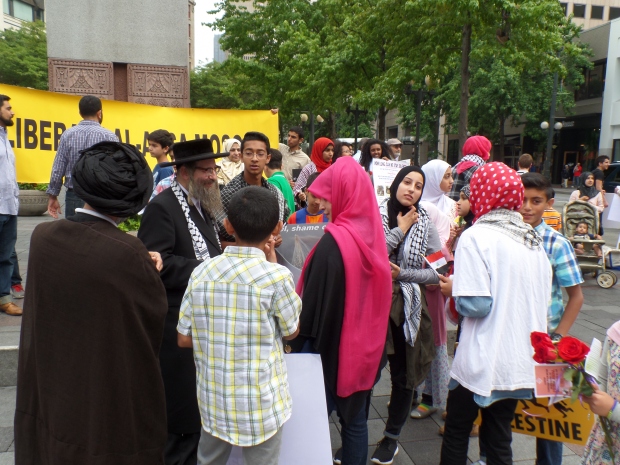 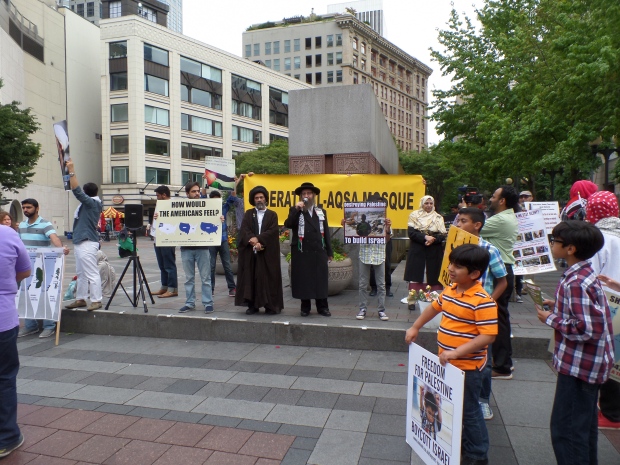 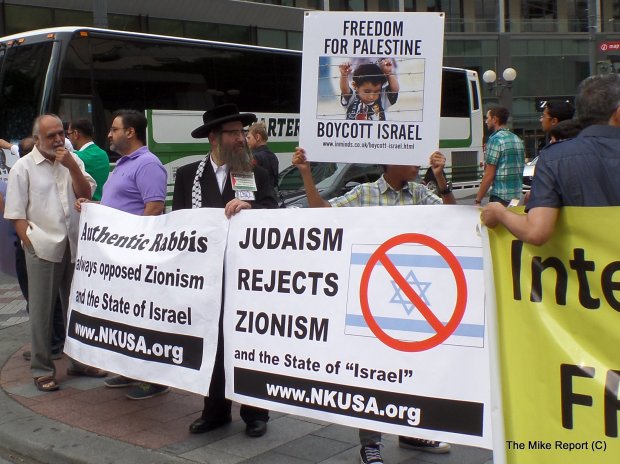 Additional photos from the  2015 Al Quds Day Rally in Seattle, below. Photos may be re-published but with credit given to The Mike Report. 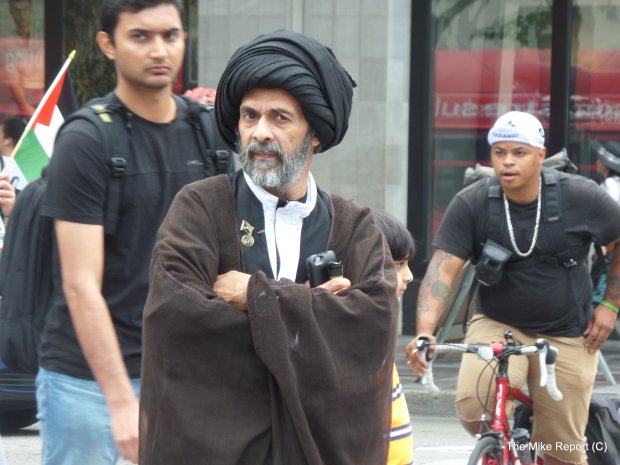 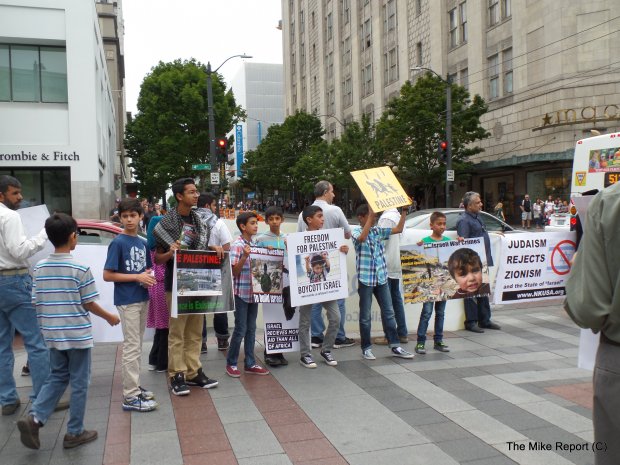 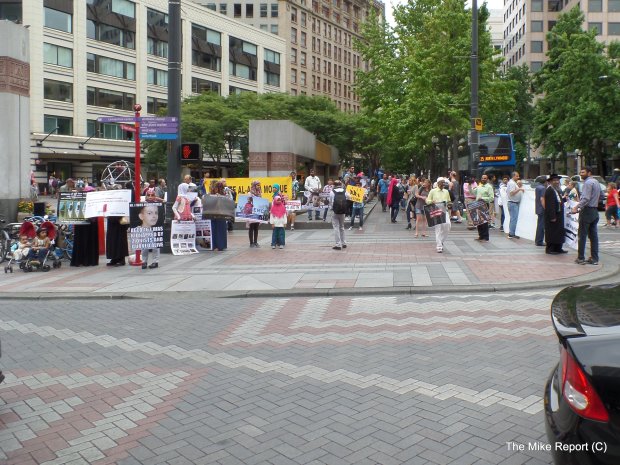