The relentless efforts of groups like New Israel Fund and J Street to dilute Jewish support for Israel in Seattle is bearing  fruit. Case in point is the upcoming lecture by Israel critic Matthew Duss. The event sponsored by J Street and New Israel Fund will be hosted by Temple De Hirsch Sinai, a once reliable bastion of support for the Jewish state.

Duss along with his colleagues at the Center for American Progress have made comments so extreme that they have earned opprobrium of the Obama White House and censure from the Simon Wiesenthal Center. Duss has referred to Israel’s defensive arms blockade on Hamas ruled Gaza as a “moral abomination” and compared the Jewish State’s policies to those of the Jim Crow South. According to the Jerusalem Post; the Wiesenthal center condemned the statements of Duss and his colleagues, describing their comments as “infected with Jew-hatred and discriminatory policy positions toward Israel.”

Hillel UW’s JConnect is promoting an “intimate conversation” with Duss immediately following the Temple De Hirsch event. The coffee & dessert reception with the outspoken Israel critic is being targeted towards Seattle’s Jewish young adults. Nowhere in the promotional materials for the Hillel UW-JConnect event are potential attendees informed of Duss’s caustic positions on the Jewish state. JConnect’s programming is funded in part by the Jewish Federation of Greater Seattle. The contact person for this event is Elana Fruchtman, Hillel UW’s JConnect Director.

Even among Israel’s Jewish critics, few have been as vocal as Duss in their anathema for the Israeli Prime Minister. Last October Duss was quoted in the Huffington Post decrying Benjamin Netanyahu as “an enemy of the progressive agenda… re-elected on the back of blatant anti-Arab race-baiting”. Duss’s animus towards Netanyahu is so intense  that he  condemned American liberal organizations for even speaking with the Prime Minister. 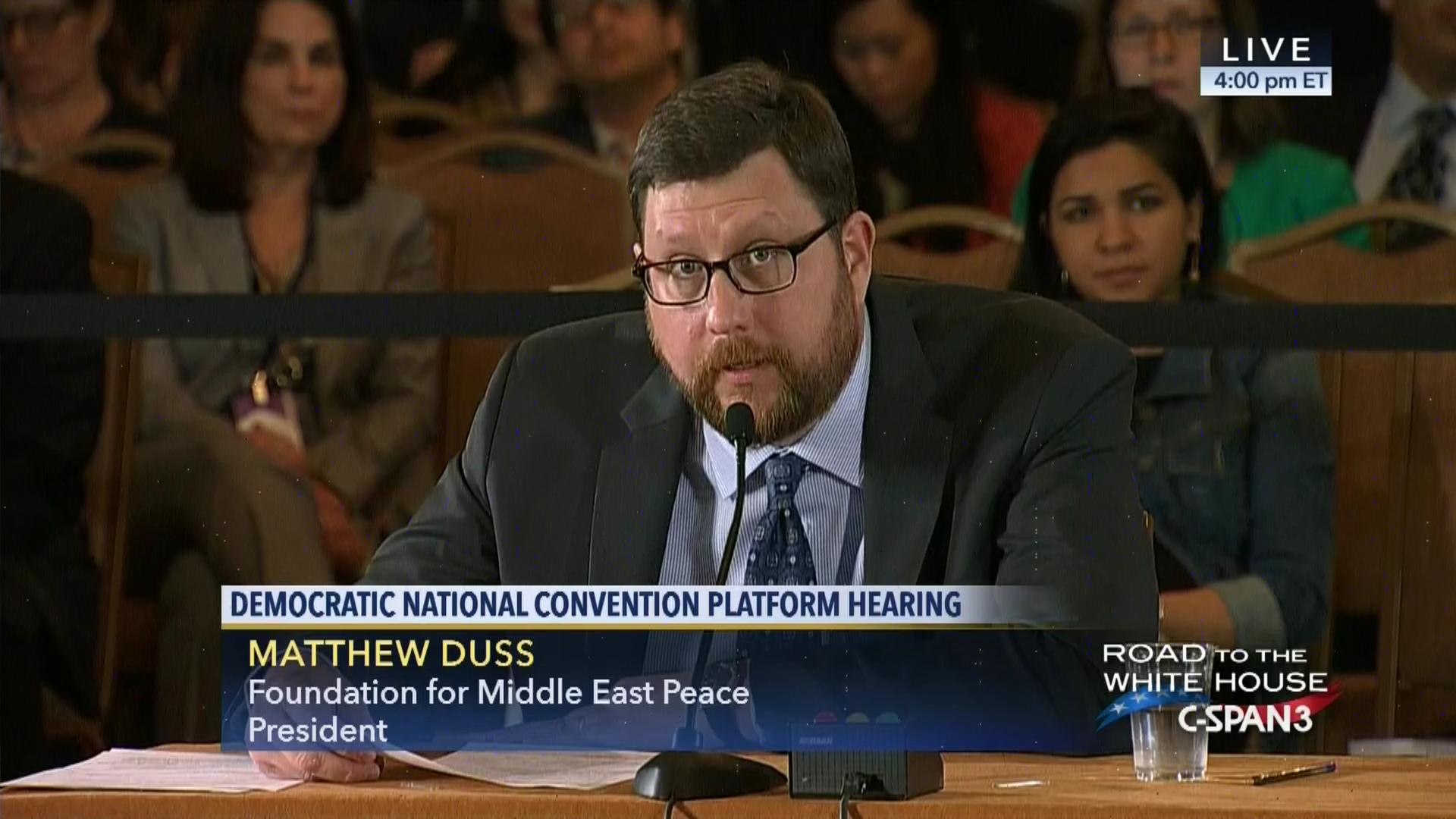 Duss is currently the  President of the Foundation for Middle East Peace, an organization that according to NGO Monitor presents “an entirely distorted view of the Arab-Israeli conflict based solely on the Palestinian narrative of victimization and Israeli aggression.”

Some in the Seattle Jewish community expressed disappointment at Seattle’s flagship reform congregation hosting such a divisive personality. Said Ari Hoffman, a local community leader; “It wasn’t so long ago that Rabbi Wiener and Rabbi Meyer of Temple De Hirsch condemned the local screening of a pro-Israel film for fear that it would undermine a communal “sense of mutual respect and tolerance”. For a synagogue so concerned about “mutual respect” I find it ironic that they are hosting a speaker who spews Israel demonizing propaganda. It is hurtful to many Jews here in the Pacific Northwest and frankly makes me sad.”

Matt Duss will be speaking at Temple De Hirsch (Seattle) on Wed. Aug. 24th at 7pm.

Update 08/22/2016: With a hastily penned email, New Israel Fund, one of the organizers of the Matt Duss event, notified registrants that the controversial lecture would no longer be held at Temple De Hirsch as originally planned.  Per the New Israel Fund, the featured speaker Matt Duss will now offer his criticisms of the Jewish State at the Kavana Cooperative/Queen Anne Christian Church in Seattle. No explanation was offered for the last minute change in venue.

Update 08/23/2016: J Street confirms that the Matt Duss event will now be held at Queen Anne Christian Church and hosted by the Kavana Cooperative.

4 thoughts on “Seattle Synagogue Hosts Israel Critic Who Was Condemned by Wiesenthal Center.”