WU Hillel won’t back up accusations against StandWithUs

Imagine a group of renegade US soldiers, soldiers who acknowledge violating stated military protocols and claiming to have engaged in immoral acts. Now Imagine those same soldiers going on an international tour generously funded by their country’s most vociferous critics for the sole purpose of  demonizing their homeland. Replace the US with Israel and we have just described  Breaking the Silence (BtS).

BDS supporting JVP are allies with Breaking the Silence.

The controversial organization works closely with organizations hostile to the Jewish State and creates dissension wherever they travel in the Diaspora.  For example Jewish Voice for Peace, which promotes boycott, divestment and sanctions against Israel, and which seeks to drive a wedge within the American Jewish community over support for Israel has a close relationship with Breaking the Silence having co-sponsored several events together.

There are, however, two groups that benefit from the international tours.

The first is Breaking the Silence itself, whose leaders and members are frustrated by their marginal role in the Israeli democratic debate. In contrast, they find receptive audiences in European capitals, U.N. forums and college campuses. Instead of the difficult task of addressing Israelis who usually have firsthand experience with the Israeli army, Breaking the Silence can “convince” audiences with no understanding of day-to-day Israeli realities. So instead of being ignored, they are the center of attention.

The second and more disturbing winners are the pro-Palestinian propagandists who use Breaking the Silence to support their demonization of Israel and of the legitimacy of Jewish sovereign equality.” 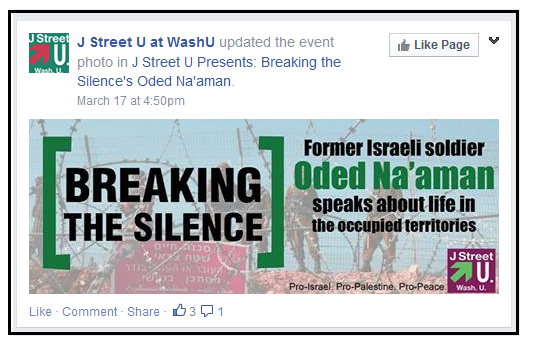 Hillel partnered with J Street U to bring Breaking the Silence to the WU campus.

Former IDF officer and StandWithUs campus coordinator Hen Mazzig created quite a stir when he wrote of his experience at a recent Breaking the Silence event shockingly hosted by the Hillel  at Washington University in St. Louis.  Hen wrote of the elaborate efforts made by the Hillel leadership to stifle debate, actively preventing former Israeli soldiers in attendance, including himself from defending the reputation of their nation and their military.

Said Mazzig in his article “I wished I could have spoken up and shared the reality I knew. Instead, the organizers and sponsors made it very clear that there would be no dialogue. They handed out a list of rules that included not telling anyone what was said in the room, how we needed to allow our beliefs to be challenged, and how we should be accepting of the speaker’s comments. The sponsors didn’t even allow us to openly ask questions. We could only write them on a piece of paper, and then they would choose which ones to ask the speaker. Clearly, they did not want the speaker to be challenged.”

The sponsors didn’t even allow us to openly ask questions.

Firing back at Mazzig  in an article in the St. Louis Jewish Light, Jacqueline Ulin Levey, executive director of St. Louis Hillel asserted that rather than stifling debate Hillel provided “a forum for thoughtful and respectful exploration of, and dialogue about, these diverse views and perspectives”.  She said of Mazzig and StandWithUs “they reflect a desire to suppress the conversation”.  In her perhaps most incendiary remark, Levey accused Mazzig of having prepared an ambush for WU Hillel  prior to the event.  Said Levey “If Hen couldn’t speak alongside [BtS Representative] Oded, then Stand With Us was going to create a national firestorm based on an article Hen had prepared before stepping into the event.”

In a conversation with The Mike Report, Mazzig expressed wonderment at Ulin Levey’s accusations.

When asked if he had, as Levey alleged, pre-written his article prior to the event. Mazzig told The Mike Report  “of course not.  If you read my article, I reference specific comments and events that occurred at the Hillel-Breaking the Silence event. I spent years working to protect civilians and to live up to my moral obligations, I saw all of my colleagues in the IDF doing the same.  The speaker invalidated my entire military service, accusing me of the very things that I worked so hard to prevent. It was because they didn’t allow me (or anybody else there) to defend myself and my country that I felt compelled to write the article. If they hadn’t worked so hard to suppress the conversation it wouldn’t have ever occurred to me to write it.”

“What is said in our conversation stays in the conversation and may not be repeated outside it.” Click for full size.

Ironically Hillel demanded that the students in attendance keep silent about  anything said at the Breaking the Silence event. In his viral JNS article Mazzig asserted that Hillel took the bizarre step of demanding that attendees pledge not to share what happened or what was said outside of the room.

The Mike Report has obtained a copy of what Hillel called the “Community Covenant” that was distributed to attendees at their BtS event. The  document supports Mazzig’s assertion that Hilled did indeed attempt to suppress what happened at the Breaking the Silence event. The first “rule” on the document states “What is said in our conversation stays in the conversation and may not be repeated outside it”.

Hillel took the bizarre step of demanding that attendees pledge not to share what happened or what was said.

The Mike Report contacted Ms Levey via email and asked if she could support her contention that Mazzig had written his condemnatory article  prior to the event. Ms. Levey declined to offer any evidence to substantiate her allegations against Mazzig and StandWithUS but did provide The Mike Report with the following statement which we have published in toto.

“The event was limited to a student audience as mentioned in my op-ed.  Stand With Us insisted on sending Hen to attend the event although I offered to host him for a student event at another time.  Hen claims he was silenced because he was not permitted to speak alongside the speaker in a panel format, but Stand With Us knew well in advance that we would not be changing the program format.  Our students welcomed Hen and introduced him during their opening remarks.  He spoke with various students following the program. Otherwise, please refer to my op-ed.”

WU Hillel partnered this event with J Street U, an organization already embroiled in controversy on their campus.  On March 28th photos emerged of two  J Street U activists at WU, Fadi AbuNe’meh and Taka Yamaguchi, wearing t-shirts sporting a photo of AK-47 toting terrorist Leila Khaled and emblazoned with the words “Resistance is not Terrorism”.

According to Sara Greenberg a member of the board at Harvard Hillel, “J Street U partners with some of Israel’s greatest enemies on campus including BDS activists and anti-Israel faculty. In a recent example from March 6, the J Street U chapter at Smith College co-sponsored an event with Students for Justice in Palestine and Faculty for Israeli Palestinian Peace entitled “A Forum on the Boycott, Divestment, and Sanctions Movement.” “

While Hillel’s Levey aserts that J Street U should be welcomed within the communal pro-Israel tent, others disagree.  Greenberg points out that  J Street U’s views on Israel are so extreme that  “the campus Jewish Student Union at UC Berkeley voted this fall to deny membership to J Street U. The bylaws of the Jewish Student Union stipulate that a member organization must not host speakers who demonize Israel. Jewish Student Union members were uncomfortable with J Street U having invited among other anti-Israel groups, the Sheikh Jarrah Solidarity Movement to campus, an organization that calls for the liquidation of the Jewish Agency and Jewish National Fund for encouraging Jewish immigration to Israel.”

In her op-ed Ms. Levey asserted that the controversy following the event  created  “a divide within our community”.  In this she is correct, but she should not be surprised. When an organization charged with a mission of providing a safe and supportive space for Jewish students on campus betrays that trust, it is of course going to cause division. Rather than being defensive about the intense communal revulsion her actions elicited it would behoove Ms. Levey and her colleagues within the Hillel leadership to do some soul-searching regarding the harm she and her organization are causing to Jewish students, to Israel and ultimately to their own reputation.